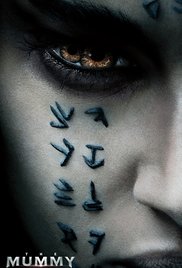 An American Arsehole in London

As TV sucks all the talent out of the Hollywood system, leaving the dry husk of hollowed entertainments, movies have attempted to fight back by, er, emulating the high concept, lowbrow TV of old – colourful, disposable, episodic. We’ve always had plentiful sequels of course but the aim now is to lock in audiences by daisy chaining movies, ensuring they’re no longer self-contained. Goodbye franchises, hello movie universes.

The latest incarnation of The Mummy, a.k.a Indiana Cruise and the Last Crusade, a.k.a. An American Arsehole in London, is the first installment of Universal’s “Dark Universe”, an attempt to make new money from the old rope of its signature b-movie monsters – Frankenstein, Dracula, The Invisible Man and so on. Most are foreshadowed here in the perverse, some would say unnatural, belief that Alex Kurtzman (of Star Trek Into Darkness fame) has styled an opener that will build an insatiable appetite for further instalments.

That’s unlikely, as his tonally schizoid monster mash is one of those fascinating conceptual misfires that, though dynamite for film schools, a masterclass on how not to launch a series, will gladly be buried by everyone else, with some unfortunate archeologist destined to unearth it thousands of year from now. One weeps for the cultural historians.

What’s been aimed for here, but resoundingly not achieved, is something like a modern day Indiana Jones movie; an adventure featuring an intrepid but flawed hero, pitted, in part, against supernatural forces. This is the same kernel used in Stephen Sommers’ camp and egregiously stupid 1999 take, but The Mummy 2017 is more industrious genre magpie, attempting to overlay elements of John Landis’ American Werewolf in London, to produce what it imagines to be the blockbuster friendly combination of action and horror comedy. Such fusions, however, require a deft touch and a strong through line, and here Kurtzman handles his influences using the same butterfingers employed in those J.J Abrams Star Trek movies. It’s not enough to copy your favourite movies, you have to understand why they work.

Central to the movie’s failure is the miscasting of Tom Cruise in the lead; a decision that looks and feels like a hastily arranged compromise in the wake of unavailable first choices. Cruise, with his forced patter and leathery skin, looks awkward in a role written for a younger man. The Mummy is a long line of modern Cruise controlled vehicles in which his partnership with a love interest 25 years his junior constitutes the kind of Body horror oft employed by David Cronenberg. The unamended screenplay gives the game away. “You’re a younger man,” says Russell Crowe (53) to Cruise (54); the latter failing to inhabit the role of someone with easy charm, endearing cluelessness and youthful dexterity – in short, a role imagined for Chris Pratt.

Just as one can understand why Pratt, assuming he was offered the part, would reject it; the screenplay is too bleak to be funny, too schlock-filled to be horrifying, too unfocused to be exciting, too stupid to be interesting; Cruise’s enthusiasm, as he tried to maintain his ailing A-list status, is less of a mystery.

The chance to play a bad boy coveted by young women? Great. The opportunity to literally suck a woman dry and assume her god-like control over men? You bet. The prospect of ending the movie as the super-human centrepiece of a new franchise? No problem. But there’s a reason this movie got Cruise and not Pratt. The Jurassic World frontman is in the ascendant; he can filter out the duds. Cruise doesn’t have many more ostensibly bankable recurring roles left open to him. The bad news for him is that following this largely joyless effort, the search goes on.