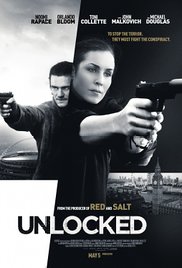 It’s been a long time since Michael Apted was called upon to deliver a dose of nerve shredding espionage and longer still, given that effort was The World is Not Enough, since he’s managed it. Now he’s back with Unlocked, a budget remake of Brian De Palma’s Mission Impossible, sans the technical virtuosity, star power or Shakespearian lines like, “hasta lasagne, don’t get any on ya”.

Instead, it takes the constituent parts of De Palma’s story – a compromised mission, a mole, an agent on the run from the CIA, and combines it with the killer virus maguffin from John Woo’s Mission Impossible 2 – less red light meets green light, more half-cocked nostalgia bender.

Apted’s reimagining of the material is more serious but less assured than the thrillers of old. With budget constraints self-evident, the filmmakers are forced to swap out stunts and setpieces for brawls in hotel rooms and a lift. Behold the shootout, in close up, in a park somewhere, or the thrilling skirmish in a corridor. In fairness, the maestro makes the best of the limited locations available, but there’s very little cinematic quality to distinguish this from slicker television fare. Less still if you factor in Orlando Bloom.

That’s not to say that Unlocked doesn’t crack on at a reasonable (ra)pace or provide sufficient intrigue to ward off narcolepsy, only that its inability to frustrate cliché (as well as terrorism), hurts both it and the audience’s attempt at investing in Alice, Noomi Rapace’s likable rogue agent.

If you’ve seen Mission Impossible, and you have, the true affiliation of Michael Douglas’s old agency hand will be clear from the moment the matinee name’s apparently dispatched at the end of Act One. By the same token, John Malkovich’s CIA chief, ostensibly Rapace’s enemy, is destined to become her ally once their mutual interest has been established. And then there’s Bloom’s solider who becomes involved when he’s caught burgling Rapace’s flat. When a movie’s architecture is patterned on so many others, one can intuit that no character, particularly one played by anyone with name recognition, will be free of the imperative to produce twists, and so it proves.

Ultimately, Unlocked isn’t original or exciting enough to be categorised as anything other than release schedule filler. A low-budget need not mean bland compositions or conventional plotting (see Welcome to the Punch), but no one involved here had the ambition to produce anything distinct, so did not.