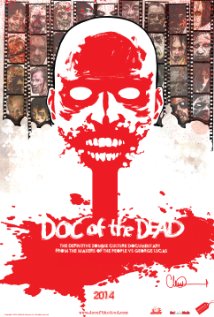 This new documentary from Canadian filmmaker, Alexandre O. Philippe, last seen reporting from the front of the war of attrition between Star Wars’ creator and the movies’ disillusioned fans in The People Vs George Lucas, looks at Zombie culture. In doing so it inadvertently supports one of its dominant narratives, namely the suggestion we’ve reached saturation point. In a film packed with spurious commentary on what Zombie fandom represents and why it’s mimetically appropriated its antagonists propensity to live on past its prime, the most telling comes from genre Godfather George Romeo, who compares the original outbreak to punk rock. Everyone knows what happened when the mainstream got hold of punk, and so it goes for the countercultural threat from the undead.

Philippe’s assembled an enviable roster of genre hands to discuss our love of lumbering automatons, including Simon Pegg, World War Z author Max Brooks and Red Letter Media’s Harry S. Plinkett. There’s a retreading of familiar ground – Romeo’s satirical take on consumerism, Zombies standing in for deep seeded social fears like disease and death – but also some useful nuggets, amongst them Brooks’ observation that horror fans are typically secure people who aren’t afraid in their everyday lives, whereas the creators of horror fiction tend to articulate their anxieties. He also believes that Shaun of the Dead shines a light on English youth, but the less said about that the better.

If Doc of the Dead feels a mite redundant, it’s because there’s little new insight into Zombie culture and nothing to trouble those already up to their bitten necks in the subject. You’re left wishing Philippe had been bolder in his method and inquires. The brief segments produced by Red Letter Media add a lot of left field humour and perhaps another way into the mythology that might have been expanded; indeed the entire movie might have been composed of outré genre snapshots such as these, in keeping with the variations on a theme that power the Zombie phenomenon. The film’s latter stages, delving into the survival industry; a racket run by conspiracy theorists and gun nuts; deserved greater probing.

Yet good though the contributors are, in a series of well-lit talking heads, Philippe’s movie shies away from interrogating its subjects and asking difficult questions. The director’s too nice a guy, and maybe too understanding for his own good, content to let those featured speak for themselves in service to fandom. That’s a pity because an outsider’s suspicion and curiosity might have powered a series of juicy encounters between the man or woman behind the camera and those that believe Zombie walks make the world a better place, or those selling survival kits to people who can’t differentiate between media and reality. Somewhere, in the tense exchanges that might have followed, we could have got to the bottom of why an increasing number of us are apocalypse fetishists. As it stands we have a documentary that’s entertaining but not especially useful.