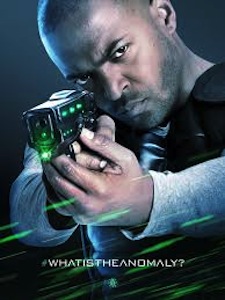 One day the world will find out what Noel Clarke has on Universal Pictures and it’s going to change the film industry forever. How do I know it’s a big secret, the kind that ruins reputations and sinks institutions? Because this alone explains the studio’s agreement to distribute the British actor’s movies. Assuming something else, like faith in Clarke’s UK box office potential, seems absurd. On the evidence of The Anomaly, the former Dr Who sidekick’s home grown sci-fi thriller, he couldn’t raise enough cash to buy lunch for the calibre of publicist he’d require, let alone their salary.

It’s customary when reviewing low-to-no budget movies, to excuse the limitations and talk about the ideas, but Noel defaults on that agreement by muddling his. The script, ostensibly about a man being controlled by an interpolated consciousness who becomes self-aware for ten minutes at a time whenever the signal breaks, as it’s prone to do at regular intervals, or something, is in fact a device to allow Noel to have a series of sub-Matrix brawls, overcranking ‘n’ all, and play out his favourite sci-fi thriller clichés. We can’t blame him for this necessarily; we’ve all wanted to jack in to a hero fucking a tart with a heart who then talks to us in a naked sprawl, knock out a guy who runs up a wall to flip over and dispatch the villain with a schlock piece of dialogue borrowed from Star Trek: Insurrection, “time’s up!”, but this is the stuff teenagers make in their parent’s homes with Dad’s camcorder, and someone gave Noel money to make this for cinema exhibition!

That it wasn’t much money is evident throughout. The whole movie’s shot on what looks like three small sets and a warehouse. This is the kind of flick that might have been filmed clandestinely on studio space already in use by another production: the interstice between other sets. When Noel dares to take his Red One and the camera operator working for travel expenses and lunch on location, artifice-shattering disaster strikes. The Anomaly’s set in the unimaginable future of 2034, for the most part represented by a handful of digital matte paintings, but when Clarke’s hero runs out onto Times Square, co-star in distress Alexis Knapp in hand (cast, one assumes, because Noel was keen to ogle her curves), there’s not enough cash to replace present day advertising with future promos – that, or the PS4 and 2013 comedy We’re the Millers have stood the test of time.

In this desperately low rent production (a present day Apple Mac sits in a future lab), that somehow coaxed Brian Cox into a thankless extended cameo, the only real mind bending question is how did it get made? “What nonsense this is I do not know,” says Noel at one point. As he didn’t complete any of his thoughts I’ll follow suit and leave it there.

Certificate: 15 for Noel Clarke's upper class English accent, making the worst of what you have, and Brian Cox.