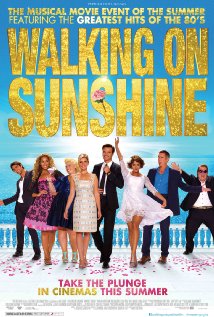 “I just don’t see why people have to make such a spectacle of their feelings” says Hannah (sister of Gemma) Arterton in Walking on Sunshine. In a movie this excitable; a film constituted from the distilled essence of a thousand girls’ nights in, it’s hard to know if the lament is a joke or an accidental gift to cynical critics wondering how in the name of Katy Brand’s bottomless cleavage this Italian set ‘80s jukebox musical came about. All we can say for sure is that scientists must have grown a sentient pair of ovaries and asked them what their dream movie looked like. The answer, apparently, is a holiday romance sing-a-long featuring safe picks for a wedding disco.

The songs, including the eponymous Katrina and the Waves ditty are well chosen, but then you’d expect them to be when the story’s been built from lyrics alone. Writer Joshua St Johnston, who sounds suspiciously made up, seems to have ransacked his sister’s old record collection, picked out her favourites and used them to construct entire scenes and something resembling a story, the process taking less than two hours.

So Arterton returns to the Italian resort where she enjoyed a fling with wooden hunk Giulio Berruti, three years earlier, to the tune of Madonna’s Holiday. When she sees him on the beach, topless of course, we get a rendition of Whitney Houston’s How Will I know, and so on. It’s tempting to joke that a movie like this must have written itself but it didn’t of course; someone had to sketch the dialogue that links the tunes. Then there’s the characters, finely drawn from life – the sensible risk averse sister, the unlucky in love but romantic sister, the portly best friend who writes erotic fiction, the fat male friend the portly best friend’s destined to end up with because they’re both fat and humorous and no large lady’s ever ended up with a hunk in a movie, the torso the sisters are both in love with (though it isn’t clear why as his personality is a void) and the smug but persistent ex, who, we suppose, will provide the ‘out’ the plot desperately needs when it transpires that the whirlwind fiancé of Arterton’s unlucky in love sibling is her holiday fling of yesteryear.

Naturally the story’s supposed to be simple in a movie like this, with preferably just the one complication, as anything more would tie up screen time reserved for singing and choreographed flash mobs. But as Walking on Sunshine goes through its paces, the supporting dancers wearily raising their legs, turning their heads and swinging their arms, we begin to wonder whether karaoke covers of Cher and the Human League were the best strategy for obtaining audience satisfaction.

Musicals, at their best, turn sets and the props therein into a stage, the world of the film and the sentiment of the song merging to form a satisfying whole, but when you’ve seen the tune performed more imaginatively elsewhere, comparisons tend to hurt the reprise. If I Could Turn Back Time was originally played out on the deck of the USS Missouri with Cher straddling a gun in fishnets. Compared to that Arterton’s rendition in an Italian church seems underwhelming. In a similar vein Huey Lewis and the News’s Power of Love will forever and a day be linked with Michael J. Fox riding his skateboard while holding onto the back of a truck in Back to the Future. If you can’t beat that, why bother?

Perhaps directors Max and Dania (no surnames credited, perhaps for legal protection) should have thought about whether a better tribute to the ‘80s might have been an ‘80s-set musical (Walking on Sunshine is set in the present day for no reason), featuring original songs in the period style. This was a strategy that worked very well in a little loved, barely seen sing song called Grease that mined nostalgia for ‘50’s America using vintage attitude and evocative tunes. Still, creating new and memorable songs takes time and an investment in industry talent. All this movie can afford is a Simon Cowell sanctioned appearance from Leona Lewis, whose acting and vocal contribution makes Hannah Arterton look like a breakout star.

Other than that, the only thing to say about Walking on Sunshine is that it retards gender representation with its by-the-numbers rendition of male and female preoccupations and character flaws, doesn’t take a single risk (other than presenting both sisters as the product of a virgin birth for they have a dead mother but no Dad, apparently), and is to real feeling what Sunny D is to real orange juice. Still, if you’re having a sleepover, intend to drink all night and like your movies thought free, there could hardly be a better choice.

Directed by: Max and Dania

Certificate: 12A for pop choices, unimaginative staging and Katy Brand.