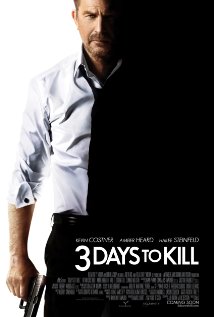 Along with Renny Harlin, an action maestro from yesteryear who disappeared without trace, people often wonder what became of “McG”, the self-branded peddler of masturbatory fantasies like Charlie’s Angels, briefly popular at the turn of the century. Real name, Joseph McGinty Nichol, McG’s sudden departure from all our lives, following the rich pickings of the Angels franchise, in which Cameron Diaz angled her bottom at the lens, and Drew Barrymore’s cleavage took top billing – the first such instance of a body part being given marque status ahead of the actor it’s attached to, lead film theorists to wonder if he’d ever existed at all; his movies arguably a collective hallucination induced by hormonal fluctuations. What was a McG, anyway? And how would we recognise it if it happened again?

Well now he/it has returned with this Luc Besson plotted (and therefore Parisian set) thriller of sorts, featuring Kevin Costner as a wizened, terminally ill CIA spook, who’s offered an experimental cure for his brain cancer if he’ll kill the agency’s top target. But wouldn’t you know it, the mission, delivered by a sultry and erotically sociopathic Amber Heard, coincides with Costner’s attempt at reconnecting with his estranged family, chiefly moody teenage daughter Hailee Steinfeld. Can Kevin juggle his responsibilities as a professional killer and a father? Sadly, McG’s more interested in that question than you might expect.

Any hope that Costner’s Daddy duties will be an amusing sideshow, punctuating grandiloquent action setpieces, wry humour and an assault on Parisian infrastructure, doing the damage that Hitler’s generals would not, fades to nothing as McGinty, Besson and hired hand to share the blame, Adi Hasak, waste the running time focusing on Kevin’s attempts at restoring his family; a trope employed by American studios because it’s thought to be a crowd pleaser but isn’t, here copied by European filmmakers who should know better.

Occasionally the B story that should be an A story breaks through, and we get a little workmanlike rough and tumble. The rest of the time Costner’s teaching his loinfruit to ride a bike, saving her from a teenage rape gang and dancing with her to old records. It’s all very endearing and we suppose, designed to help us invest in the characters, with some broad comic situations crow barred in as support, but so familiar is the plot’s trajectory (you just know the daughter will stop using her father’s Christian name and call him Dad at the close), so many times have we watched a similar story go through its mechanical stages, that we long for this domestic wrangling to be truncated in favour of the kind of bullet and bang bloodbath the premise promised.

Still, Costner, though gruff and bored, is reliably solid in this Liam Neeson cast off role, and the movie’s fine, in a mid-budget, wholly inconsequential way. We just miss the days when all concerned had a little more pep and a lot more money to burn. Poor McG: from Diaz in her underwear to Costner’s craggy puss in just ten years.

Certificate: 12A for father/daughter issues, a hitherto unknown cure for brain cancer and bad hair continuity.