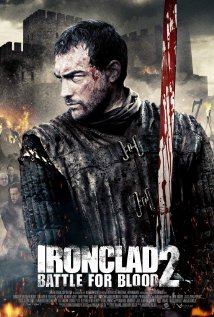 When the history of sequel oddities is written, a tome on which I hope to contribute a foreword, Jonathan English’s follow-up to his own bloodthirsty chronicle of monarchical madness in the middle ages will surely be a shoo-in for inclusion.

It has the feel of a follow up that English either helmed so no one else could or was desperate to make, despite a lack of interest from financiers and agents. Ironclad did average business but clearly not enough to entice any big names to return for this shoestring retread. To blow the dust off a joke from the 13th century, the cast of Ironclad 2 aren’t even marquee names in their own households. The problem with the video on demand mercenaries assembled is the demonstrable lack of personality they inject into the film, a quality the original had by the slop bucket load thanks to the likes of Paul Giamatti, Charles Dance and, er, Jamie Foreman.

In place of the original’s historic specificity we have a reverse Braveheart in which a barbaric army of Scots warriors, facepaint, tartan and all, lay siege to an English castle, prompting the embryonic master of the house to slip out and recruit cousin Tom Austen’s band of mercenaries to slay the Celtic intruders. Head Scotsman Predrag Bjelac plays like the first leader of the SNP, crying “break it up” and “English!”, in what’s either a term of racial abuse or frustration aimed at his director. His blood feud with David Rintoul makes little sense as his murdered son was only in harm’s way because he brought him to the battle in the first place. As much sense, in fact, as English’s other attempts at injecting conflict into his story, like the sexual tension between young master Hubert and “Crazy Mary”, a libidinous psychotic with a penchant for stabbing men to death.

The film’s politics, perhaps reflecting the current tensions over the Scottish Independence question, are curiously dull. English is monstrously even-handed, taking great pains to show why both sides should feel aggrieved, but you don’t go to a movie called Battle for Blood so you can come out saying, ‘well on balance, I thought both the Scots and English had cause to be angry’, you want a villain that stokes bloodlust. Even that old racist Mel Gibson understood that the blows hit harder and the blood sprays more satisfyingly when the audience are conditioned to hate the enemy as much as the heroes do. In this movie we shrug our shoulders.

With a budget that looks to have been capped at £748, Battle for Blood has an uphill task in retaining our attention, so it’s surprising that English makes so little effort in getting the best out of what he’s got. The film’s criminally deficient in atmosphere, thanks to the baffling decision to crank up the foley while turning down the background sound and score. This has the effect of sucking the life out of scenes, be they tavern brawls or castle battles. In this strange, quiet movie, where Helen Keller appears to have been a sound design consultant, the spaces between exchanges of flat dialogue seem vast. With the filmmakers hitting the mute button we’re inadvisably invited to study the framing and editing of action, the camera afflicted with Parkinson’s disease, the editor with premature excision, the result being injury we can’t see and conflict we can’t focus on: just what you want in a gritty historical battle drama.

Budget constraints are, by their very nature, limiting, but watching Battle for Blood there’s the sense that simple tricks – interesting camera angles, greater movement, better composition, using sound to its full effect and yes, a smoke machine, may have given this lifeless reprise some vitality. Instead English has marred his previous good work by releasing what looks like an unfinished sequel into cinemas, that plays like the no budget project that got him the original gig, rather than the reverse. Like I said, odd.