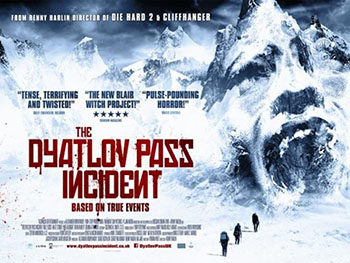 Warning: This review discusses the plot and the fate of some characters.

It’s been a long time since Renny Harlin, the director who sank Carolco Pictures with Cutthroat Island, has been allowed near a blockbuster budget. The failure of his signature blow-out precipitated a slow decline that culminated in the formally bankable helmer’s rock bottom moment, the execrable Exorcist: The Beginning. The derision heaped on that effort hasn’t put the Finnish fuck off the horror genre however. The Dyatlov Pass Incident, retitled Devil’s Pass in syllable shunning territories, is a low-budget addition to the increasingly well-worn found footage sub-genre, and though a far cry from Harlin’s golden age, shows he’s lost of none of his taste for lapses in plot logic.

One wonders if Harlin saw Josh Trank’s Chronicle and admired its ontological shortcomings. Found footage movies, when well-conceived, as in The Blair Witch Project and Cannibal Holocaust, can be highly involving, but when the mode is adopted as a style opt-out; an excuse to tell a story without polish or complexed camera set ups, the results are infuriating and detrimental to the tale being told.

TDPI purports to be the mysteriously edited rushes from a documentary crew following in the footsteps of a fascinating real world incident in which a group of hikers perished under strange circumstances in the Ural mountains, but their filmed legacy is curious to say the least. Whatever happens to this group, whether they’re talking idly or running from assassins, the action’s always perfectly framed. It’s tempting to call it serendipitous when you plonk a camera on a rock and a couple of characters take a seat nearby, creating a perfect two shot, but when that luck extends to one character’s demise – her body swept into the lens by an avalanche, it starts to look as if God himself is in the director’s chair; the same God that’s presumably collated this lost footage and cut it together.

You might think the inevitable constraints of filming the expedition, such as the death of a sound girl and the loss of a camcorder to a bunker for 53 years, would hinder the quality and availability of footage. Not a bit of it. Whatever camera’s been used the sound is perfect throughout: as it’s though it’s been professionally mixed and had foley added. Suspicions that the DV cam has a great battery life, as the shooting ratio for such a trip must be huge, is confirmed with hindsight, when we reflect that a camera taken five decades into the past still has enough power to review footage when discovered in the present.

All of which is a shame because The Dyatlov Pass Incident has an interesting premise and an enjoyable, mind-bending conclusion. Had it been filmed like a real movie, with care metered out to style and characterisation, it could have been an effective sci-fi horror hybrid. Instead its grab at realism makes the artifice highly conspicuous, while the victims remain just that, never in danger of achieving the illusion of interiority in what amounts to a lot of loose talk and the odd aside to camera.

Is Harlin better than this? God knows he used to be. Perhaps it’s time for a bored billionaire to give him $200m so he get back to staging highly improbable action like in the glory days. This bargain basement world isn’t for him.