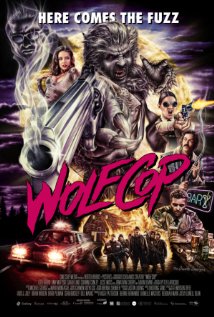 The prize of a million Canadian dollars and the chance to add to that country’s cultural archive, went to the team responsible for this b-movie schlocker with a genre fan baiting title. If Alan Moore’s Show Pieces was an example of how a thoughtful and technique savvy approach to low budget horror can reap dividends, Wolfcop is the opposite. It’s a movie where all the thinking was concentrated on that title, the rest filled in later. Director Lowell Dean saw a poster, a slug line, “here comes the fuzz”, and assumed the movie would write itself. But movies don’t write themselves and sadly for Dean, they don’t direct themselves either.

Wolfcop’s amateur stylings would normally be written off in light of budget limitations, but watching this ideas stack, built from Satan worshippers, shape shifters and the like, we’re reminded that what’s missing costs nothing – a coherent story, memorable characters and pin-sharp gags; a trio sometimes known as smart writing.

This is yet another half-baked offering, in which a tantalising premise is neutered by the creative ineptitude of those involved. You can say that £553,000 doesn’t buy you A-List acting talent nor cutting edge visual effects, and no one expects to see the same in a movie about an alcoholic plod turned into a furry crime fighter by a group of demonic lizards, but at the risk of sounding like a grump, there comes a time when even the most enthusiastic amateurs have to consider their audience not themselves. In short, the object of the exercise isn’t to have fun; it’s to make a movie. Wolfcop’s the filmic equivalent of horror fan fiction. Satisfying for those who wrote it, but only for them.

The movie’s not a complete dud. If you can put the garish DV photography, bad blocking and friends of the production performances to one side, there’s a fine sense of the absurd. The delivery of deadpan lines like, “have long have you shapeshifters been running this town?” hint at what could have been, while the presence of a transforming penis, going further than John Landis dared, and a night of lust between the Wolfcop and Sarah Lind, will partially placate those in search of a movie as deranged as promised. Ultimately though the lack of consistency proves the rule that if you want to make a great comedy, you have to get serious.