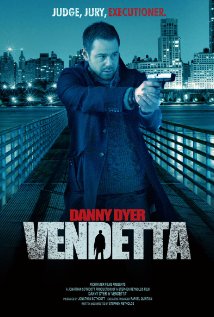 Warning: This review reveals details of the plot, including the fate of fuckin’ characters.

In a revelation likely to send shockwaves through the British Film Industry, Danny Dyer recently confessed to disliking some of his own movies. “Sometimes you sign up to a job and you’re like, ‘That’ll be alright’,” notes the British Brando, “then you watch it back and you’re like, ‘Oh.’ It’s depressing.” That’s not a regret he ascribes to the imaginatively titled Vendetta, however – no sir. Upon viewing Stephen Reynolds’ vigilante thriller, that cannily combines a shapeless narrative with a wagon load of well-worn clichés to produce something that’s even more shapeless and derivative than its hackneyed parts, Danny’s alleged to have thought to himself, “’Wow, well done Dan. Give yourself a pat on the back’.”

It’s likely most audiences will opt for a bullet rather than a pat, having sat through the poorly paced misadventures of Jimmy Vickers – a squaddie, fresh from the Helmand theatre of war, who returns to the lawless Britain memorably described every day in the editorial of Richard Desmond’s Daily Express, only to discover, would you Adam and Eve it, that a sadistic gang of drug dealers; sub-human chav scum; have avenged a foiled robbery by burning his have-a-go hero father and mother to death. This, thinks Jimmy/Danny, is bloody typical of a country that went to the dogs while he was in Afghanistan, murdering zealots on our behalf, and before you can say “revengerance”, he’s taking names, calling in favours and tooling up for the inevitable confrontation with that pack of feral youths.

If Jimmy/Danny shows a worrying lack of imagination coupled with the absence of anything approaching a social liberal conscience, then it’s a malady shared by the Metropolitan Police, spearheaded by Alistair Petrie’s Inspector Holland, who we immediately suspect is so named because the writer/director recently had a great weekend with the boys in Amsterdam. Holland’s a plod conjured by the right-wing imagination; a cynical careerist who cares nothing for real justice, merely maintaining a good clean up rate. Everyone’s united in their hatred for the underclass you understand, it’s just that Jimmy/Danny alone knows what needs to be done. He even manages to convince stuttering audience proxy and friend, Griff, a PC with a shaky faith in the ailing rule of law, who forever sounds like he’s delivering evidence in court, that vigilante justice is the best kind. “There was a time when I’d have bled to put red in the Union Jack,” he tells the disillusioned bobby, apparently unaware that the flag’s pre-existing colour scheme would make such a sacrifice unnecessary.

Later, when Reynolds has used up his twenty minutes of material leaving nearly an hour and a half of screen time to fill, we learn that Jimmy/Danny is part of an elite squad of trained killers, composed entirely of psychopaths (their atypical nature ensuring Jimmy/Danny doesn’t besmirch the good name of the armed forces), and that his speciality is interrogation. This is news to us because it’s a skill Jimmy/Danny never uses. If interrogation is the art of cleverly extracting information from difficult sources using innovative psychological techniques, then Jimmy/Danny’s strategy seems a little heavy handed and obvious. Any man strapped to a car seat and covered in petrol is likely to tell you something and thereafter Jimmy/Danny doesn’t ask any questions at all, instead opting to indulge in the kind of violent fantasies that gets the writer/director/editor hard.

Structurally Vendetta is as wrongheaded as its fascist bent. Reynolds knows that audiences will expect Jimmy/Danny to work his way through the gang from the bottom up, thereby paving the way for a final, brutal confrontation between the wronged man and the thug who killed his Mam and Pap. Wrong-footing them by having the head of the gang killed first, thereby dissipating any sense of anticipation and precluding the possibility of a satisfying payoff, is therefore audacious indeed. With no one left to kill of any importance, Reynolds can turn his attention to other matters; the elite squad sub-plot, Jimmy/Danny’s wafer-thin backstory and the will they/won’t they relationship between Dyer and his soon to be ex-wife, Roxanne McKee: a question Reynolds settles nice and early by having them sleep together at the first opportunity.

Added to a script you could have written yourself in half an hour, and probably have, is a lot of flam and misogyny. Reynolds contrives to get jobbing actress Naomi Todd into a scene in which she’s improbably taken to a flat of drug fuelled hardons by her hapless boyfriend, just so she can be intimidated into airing her mams. Tiffanni Thompson, the other feminoid associated with the gang, likes to shoot in her underwear. And as for poor Roxanne, well – she won’t get naked and she doesn’t have a character of her own so you can probably work out her fate for yourself.

But perhaps the most depressing reveal in a movie that’s only copper-bottomed surprises are the terrible decisions made by the production, is the realisation that Vendetta’s been conceived as a franchise. The final scene suggests a planned sequel in which Jimmy/Danny, now on the run, will be hunted by his former squad. A final caption promises that “Jimmy Vickers will return”, like an underwritten James Bond, while a credit footnote declares that if Reynolds’ screenplay has whetted the appetite for all the material he couldn’t organically weave into this dense and multi-faceted movie, then good news: there’s a novelisation available to buy online! One wonders how Reynolds can be deluded enough to imagine he’s made a flick with an afterlife but then he fancies he’s a filmmaker and Dyer’s a star. Are you going to tell him or shall I?