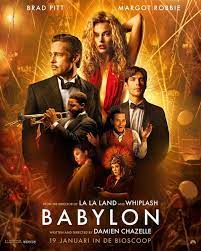 Damien Chazelle’s had a run of lovingly made, high-quality movies – the kind of run that, historically, in what is sometimes called Michael Cimino syndrome, leads to a filmmaker’s eyes becoming larger than their stomach. It’s the road, strewn with elephant dung, that leads to hubris. The success that guarantees monumental failure. Babylon is that dud, and that’s not because Chazelle has forgotten his impeccable craft (or what stimulates his pecker). Nor has he lost his impetus for kinetic, bombastic filmmaking. If anything, Babylon is too good a recreation of late-silent era Hollywood – it’s self-indulgent, overwrought, underwritten, and following a full-frontal assault on the senses, peters out into irrelevance. A terrific metaphor for the original “low art” then, and maybe the movies in general, but not a great film in its own right.

The problem, as becomes apparent over three hours of diminishing interest, and thematic repetition, is that “real” movies – ones informed by nostalgia but blessed with a compelling audience pleasing narrative of their own – step forward Billy Wilder’s Sunset Boulevard and Gene Kelly and Stanley Donen’s Singin’ in the Rain (both heavily referenced here), did it so much better, and with greater pathos as they were in touching distance of the era they celebrated and parodied. Wilder, for example, could cast real-life forgotten star of the silent era, Gloria Swanson, as forgotten star of the silent era Norma Desmond, because this was Hollywood reviewing its own history in real time.

Chazelle’s aim appears to be an unsentimental, sardonic riff on this kind of movie about the lost magic of the movies; a film that strips away the sanitising gloss of old;  but his film lacks the human dimension and wit that made the aforementioned classics enduring movies in their own right. Instead, Babylon parades one dimensional proxies for the lost stars of the 1920s, with an obnoxious mean-spiritedness that tests patience. When one considers that the story amounts to a daisy-chain of vignettes designed to show off Chazelle’s cinematic virtuosity, the entire enterprise amounts to a vainglorious exercise in sound and fury signifying – well, the slow death of the cinematic experience, a terminal illness that this kind of vapid, pulp nostalgia will do little to slow.

It would have been possible to tell the story of Margot Robbie’s up and coming starlet and Brad Pitt’s washed up matinee idol (the other characters are given second order consideration, which is a shame as they represent the black and immigrant stories of old Hollywood that are seldom told) with a little more panache and classic narrative virtue. Quentin Tarantino, for example, showed with Pulp Fiction that you can take old movie staples and make them new with a hardboiled, wit-infused screenplay. Babylon, by contrast, is loud, coarse and overlong without being particularly involving. By the end, we’re bored enough to return to our hotel rooms and blow our brains out.

A movie patterned on Singin’ in the Rain – sans the warmth and mystique, has no business ending with one of the principle characters watching said movie. Chazelle’s signalling his own film loving credentials in this sequence (one of the films many false endings) but he should have known that the kind of audience that would flock to a three hour movie about movies, wouldn’t require such explicit referencing.

Babylon’s influences are plain enough without being shown on screen. But this final scene goes further – reaching into the future to posit the idea, in montage, that the movie experience, though ever changing – the transition to digital likened to that from silent to talkies, remains essential.

The problem is that film, as a theatrical experience, is under threat like never before. We know it because we have movies like Babylon that seem to have been greenlit to remind us how great that communal experience is and what a noble art form we’re privileged to partake in. But the message is undercut when the movies that exist to rekindle our love of movies are bloated, broad and boring. If film is to survive it not only has to look forward – providing, as Brad Pitt’s Jack Conrad suggests, the next big thing, but remember the storytelling craft and concision that made the best of the medium the quintessential popular art of the 20th century.

Certificate: 18 for little or no resemblance to the David Gray song, distracting nipples, and Eric Roberts.