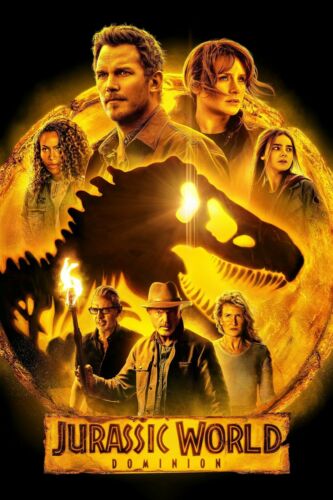 To appreciate the impact of Steven Spielberg’s 1993 blockbuster, Jurassic Park – not his best work by some distance, one need only consider that the basic proposition; photorealistic dinosaurs hunting humans, has sustained five sequels, none of which, like the original film, was particularly good. But Spielberg’s movie had a USP backed by skilled direction so as to leave a pop cultural impact crater just a little smaller than that marking the meteor that wiped out the real monsters.

But this is a franchise of two eras. The first trilogy, directed by Spielberg and Joe Johnson, shuffled its thinly drawn human characters but delivered some good and memorable set piece action. Colin Trevorrow’s legacy sequels from 2015 onwards, have only threatened to induce similar thrills once, when the writer/director was held in a pen, awaiting his doomed Star Wars assignment. That sequel, Fallen Kingdom, directed by J.A. Boyona, had a little visual flair at least. The bad news for fans waiting for a Jurassic Park movie that finally fulfils the promise not quite delivered by the 1993 movie – humans you care about fighting for survival – is that Dominion is both the weakest of the six movies and a gene splice of everything that’s wrong with them.

The film is anaemic in all departments from the flat direction to the formless score. Both new and old characters, dressed as they first appeared, lest we forget who they are, such is their total superfluity to the stories in which they feature, never transcend their plot function. For the Jurassic World crew it’s about rescuing that stock blockbuster fantasy trope – the virgin birth, now teenage girl, who’s the key to everything – from the clutches of a Tim Cook-like corporate CEO whose bio firm is attempting to use spin-offs from John Hammond’s tech to control the world’s food supply. Tim Cook is interested in her genome, where BD Wong, here flipped from villain in Fallen Kingdom to recalcitrant environmentalist, hopes to use her DNA to make safe a swarm of Cretaceous Locusts that the company made to achieve market dominance. Meanwhile, the Jurassic Park trio of Goldblum, Neill and Dern, at said company’s Italian headquarters – effectively a new Park, investigate the company’s shenanigans under the guise of consultants. If that was hard to read imagine what it’s like to watch.

All franchise assets eventually converge of course, but not to any affect as we’re neither invested in the Cretaceous Locusts, except perhaps when lamenting that they don’t have their own movie as they’re a much more interesting threat than the now background dinosaurs, or the fate of the girl you don’t remember from Fallen Kingdom, whose destiny as a vehicle for curing disease and abolishing sex we’re asked to care about but don’t.

Trevorrow manages to execute one half-decent setpiece, a Bourne-inspired escape from Malta, with trained raptors in pursuit of a Chris Pratt on his motorcycle, but this aside, all concerned have made the audacious decision to relegate the dinosaurs – the marquee attractions, to the status of background extras. Their ubiquity makes them dull – so much so that the odd human being eaten barely registers.

The hapless Trevorrow, desperate to find a place for the one-time monsters in his plodding ecological fable, makes the human maguffin part of a pair that includes Beta, the raptor baby of Blue from the first two Jurassic World movies. It’s left to Jeff Goldblum to raise his eyebrow at that plot point, on the audience’s behalf – the closest the film comes to a breaking of the forth wall. But ultimately, Jeff, like everyone else, is subservient to the film’s kumbaya didacticism – a philosophy that forbids too much violence between animal and human. This, after all, is a movie preaching the virtues of co-existence, of accommodation, which is a development from Ian Malcolm once noting that dinosaurs had their time and nature selected them for extinction.

Jurassic World: Dominion then, is a tedious corporate exercise in joining up IP, that delivers for the zen-like sensibilities of the filmmakers at the expense of the audience, who were entitled to expect some threat and exhilaration in a film ostensibly about the re-taking of the planet by 65 million year-old giant lizards.

Given the movie’s delayed launch and prolonged post-production time, it’s odd that some of the FX shots look unfinished, but it’s really the film’s ideas which needed a longer gestation period. Everything about Dominion is half-cocked, even its philosophy. Will any set of filmmakers ever get it right? If the inexplicably high box office returns mean anything, we’ll find out in a few years.

Certificate: 12A for being a dinosaur flick that's actually about locusts and special kids, the reuse of a lost prop from the original movie, and Laura Dern being unable to take off her glasses like a normal person.