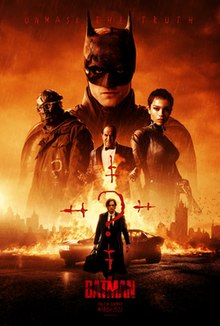 Warning: This review alludes to plot elements. Do not investigate further until you’ve seen this title.

Warner Bros’ insatiable hunger for Batman movies may seem the product of creative timidity and commercial cynicism, because it is, but it’s also nothing new. Think of the number of Sherlock Holmes adaptations, or versions of popular characters like Robin Hood or Dracula made in the studio era. What we now call bankable IP has always been a recurring staple of the cinematic experience. What’s changed in the post-pandemic era is cinemagoers now have little interest in anything else.

The only question informing Matt Reeves’ Batman is not whether it would be made but is it distinct enough to justify the attention the studio have presumptuously taken for granted? After all, we’ve had the expressionist version, the camp version, the Michael Mann crime thriller version and in Ben Affleck’s hands, the stupid version. What’s left? Well, says Reeves, how about a return to the noir sensibility of those early Batman detective comics – an adventure in which the caped one-man psychodrama weeds out corruption and its legacy in a mean and moody Gotham City?

Sounds good, doesn’t it? A troubled batscape for troubled times. And for over two of its three hours, The Batman is the ‘40s inspired, sinister traipse through the criminal underworld promised. Its David Fincher-inspired (read: aped) aesthetic positions the film halfway between Tim Burton’s gothic rendering and Christopher Nolan’s heightened reality. But this is very much a comic book world – a city (de)saturated in atmosphere befitting Bruce Wayne’s pessimism – a hardboiled take, personified by a joyless Robert Pattinson.

The flaw in the film is there at the outset. The investigation that connects Batman to Gotham’s mob and mayoralty is the hunt for Paul Dano’s Riddler – a sadistic Zodiac-inspired serial killer who’s targeted corrupt officials. Initially this fusion of Seven and Raymond Chandler works well enough, but Reeves’ screenplay feels compelled to give its main antagonist a grander, over-arching role in proceedings, and this inadvertently leads to a distended third act and the invocation of Nolan’s Bat-trilogy; an unwelcome shift in tone and emphasis incongruous with what has gone before.

Why the need for a Nolan-esque, villain in a cage with a diabolical scheme in motion finale? Why the uneasy pivot from genre pastiche to genre cliché? Perhaps Reeves thought a blockbuster audience would demand a big finish – an escalation to match the sense of cinematic occasion. On this evidence he also imagined an old fashioned sensibility was not enough – that the film needed some contemporary relevance. But he forgot, or did not have sufficient confidence in, the pleasure of the ‘40s noir’s closed world – a story concluded with character moments and smart dialogue. This, not the blockbuster’s propensity toward spectacle and destruction, is the satisfying payoff to a story built on the interplay between morally ambiguous characters inhabiting a distinctively cinematic reality.

The Batman has much to recommend it, however. Though Pattinson appears to be channelling a moody teenager with mental health challenges, his Bruce Wayne’s palpable unhappiness and angst makes for a less affected Batman than we’ve seen for some time; his caped crusader an extension of his personality rather than an alter-ego. That’s the movie’s MO. Zoë Kravitz’s Catwoman is a vehicle for Selina Kyle’s attempt to bring down mob boss, John Turturro. Colin Farrell’s Penguin is the fixer’s handle. In Reeves’ Gotham assumed identity is just a front that allows each character to operate unchecked.

That theme of the unaccountable been brought to book, to face some form of justice, and the personal consequences for those trying to renew a city ruined by criminality and vice, has an urgency and tangibility in this Batman story, named checked but skimmed over in its predecessors. If the film falls short of greatness, because Reeves didn’t know when to cut and run, it is, in its final extended form, a superior comic book adaptation and brooding thriller in its own right. The hope must be that as blockbusters become cinema’s sole attraction, the temptation is not to overindulge as here. Less is more, even when there’s less to see.

Certificate: 15 for the Riddler's unintentionally funny looking henchman, emo hair and Nirvana being too on the nose, and a third act imported from the last Bat-trilogy.