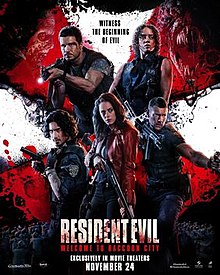 Following the release of Storage 24, the diabolical b-picture from Johannes Roberts, I wrote an open letter to the director, in lieu of a review, begging him to give up filmmaking. It’s not enough to know what you like, I told him – we all love the Alien series for example. One has to, if you’re a filmmaker, ask yourself, “do I understand how these effects, both photographic and psychological, are achieved?”, “Can I reproduce them?”. Roberts couldn’t then and can’t now but he perseveres – his hack work occasionally appearing on the multiplex fringe.

Did anyone want a reboot of the Resident Evil series? Paul W.S Anderson’s cine-spin off from the console game was an exhausting trudge; a showcase of low-budget action movie clichés. Fans of the series didn’t seem to care that Anderson, the Tyler Durden to auteur Paul Anderson’s Ed Norton, had no talent for characterisation or thriller technique – his the empty stylings of a teenage fan film creator. The movies made money and the sequels kept coming. But in the end, Anderson’s wife Milla Jovovich ran out of juice and the audience out of interest, and the franchise went into hibernation, ready to rise again when some deranged filmmaker with a career death wish sought to shake it from its slumber.

Johannes Roberts, a man desperate for a hit and with zero artistic qualms about heading a console game adaptation, is that lunatic. One imagines he saw, in the plot of the first two games, an opportunity to invest the material with elements stolen, that is to say lovingly recreated in an act of homage, from some of his favourite flicks – Aliens, Assault on Precinct 13 – a low-budget horror with an ’80’s sensibility (though it would be set in the ‘90s). But Roberts is still the director of Storage 24, so his ability to conjure the spirit and tone of these classics is fatally compromised. A filmmaker infected with the Umbrella corporation’s T-virus would stand a better chance.

Mind you, this is a more low-key, more grounded Resident Evil movie than its bombastic, overwrought predecessors. Roberts sticks to the game’s core characters and handpicks a few movie-friendly situations, and ends up with something watchable if entirely forgettable. There’s an attempt to invest the shoestring environs with atmosphere – lashings of rain, low lighting, washed out colours. But this is all technical and familiar hackwork. What’s missing and what any writer/director can add for free if they have the nous, are characters that leap off the screen and lodge in the memory. Instead, we’re given a group of pretty faces, none of whom transcend their plot function and many of which spend much of their time talking exposition as Roberts has yet to understand how to impart this information cinematically.

Resident Evil: Welcome to Racoon City isn’t the worst of the series (I think, I can’t remember) but it makes the cardinal error of being a film that relies on its audience’s knowledge of another source – namely the games – to imbue the material with the recognition and understanding it fails to produce independently. Fans of the game will say it’s an acceptable diversion. For the rest of us there is nothing.