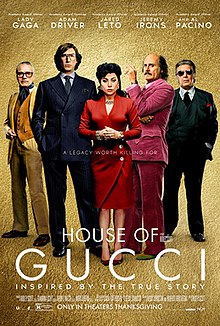 Following the unseen and unbalanced The Last Duel, Ridley Scott revisits his interest in morally ambiguous women under the dynastic cosh in an altogether different vehicle. House of Gucci is, at first glance, as distanced from Duel as a chic vintage handbag is from a knight’s lance. After all, isn’t this story of Patrizia Reggiani’s entrenching in a fashion empire run by emotionally dysfunctional men pure melodrama; glossy camp to sate our need, as poor people with ordinary lives, to sneer at the privileged?

No – says Ridley, though don’t worry it’s all very silly and there’s plenty of contempt on display for the warring Guccis. That handbag and that lance are both symbols of the same thing, patriarchal power. Whether it’s the medieval French court or an 1980’s fashion house, there’s always dicks to be swung and one woman, at the centre of it all, who’s obliged to duck.

Once again Scott wants to make sense of a relationship breakdown with dynastic histrionics as a backdrop. But whereas The Last Duel offered a tale of a woman struggling to survive in a brutally misogynist system, House of Gucci invites us to sympathise with an altogether more problematic character, one whose motives are immersed in fog.

Patrizia Reggiani, as played sumptuously by Lady Gaga, is a beautiful, boisterous, self-confessed “people pleaser” who’s enamoured by Adam Driver’s shy and awkward Maurizio Gucci after they meet at a party. Reluctant at first, he succumbs to her charms, brushes aside his father’s warning that she’s an aspirational working class gold digger, and marries her.

Initially, we’re set up to reject Rodolfo Gucci’s snobbery. After all, Reggiani is a sincere, heart-on-her-sleeve romantic; the kind of woman any man would fall for from force of personality alone. Post-marriage, slowly but surely, and helped by the patronage and sympathy of Maurizio’s Uncle Aldo (Al Pacino reprising his Godfather III role with added camp), she takes her place as a Gucci mother and under arm accessory for her man, badgering him into taking a more active role in the family business.

It’s at this point House of Gucci executes a not altogether comfortable pivot and enters a period of moral murkiness. Reggiani begins to show a great interest in the trappings of the Gucci empire. She pushes her husband, first gently, later with furious indignation, to take on his relatives, manoeuvre his way into a controlling interest in the company, then hijack the brand. Scott’s direction suggests the quietly ambitious Reggiani is motivated not so much by pure greed, as misplaced entitlement; a woman whose business acumen and sense of purpose is undermined by the Gucci closed shop and her husband’s tangible lack of ambition.

Scott’s keen to convince us that Reggiani’s love for her husband and the fusing of their interests comes from a place of sincerity. He’s more certain when it comes to the motives of the late, murdered Maurizio, who seems to shift from reluctant power broker to materialistic, self-interested, profit plundering bastard. Maurizio blames Reggiani for the familial strife he’s implicitly endorsed, then casts her aside when her emasculating power play embarrasses his sense of propriety. Having dumped his wife and started an affair with a high-class friend (events the movie conflates for dramatic effect) we’re encouraged to sympathise with Reggiani’s wronged woman righteousness and thirst for revenge. I mean, who could fall out of love with Lady Gaga for God’s sake?

The problem with House of Gucci, its big swings between soap operatic melodrama and Mel Brooks levels of camp aside, not to mention its self-indulgent length, is that human and audience friendly story though this is – a strong and likable woman at its heart, it may also be complete fantasy. The real Reggiani, according to reports, had none of the work ethic or heart exhibited by her movie counterpart. Her murder trial, which the film skips completely, cutting to the verdict, painted a far grimmer picture of a woman motivated to kill out of wounded pride, loss of status, and a threat to her monumental income. Maurizio, guileless and heartless in Driver’s portrayal, expected his ex-wife to live on just under a million dollars a year. No wonder she had him shot!

So, like The Last Duel, this is a tragic story that comes down to where the audience places its sympathies and who it believes to be sincere. Scott fumbled with his medieval movie – here he’s less assured still. A vulgar picture is painted. Its resemblance to its subjects is a matter of debate. Still, how about those handbags huh?