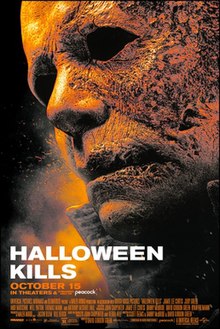 Halloween Kills or, if you’re keeping track, Halloween 3 version 2 (Halloween 2018 being the new Halloween II) picks up, where David Gordon Green and, gulp, Danny McBride’s sequel retcon left off – just as the old Halloween II continued from Halloween (1978). Still with me? You may recall that movie ended with Michael Myers being lured into a domestic bear trap created by a middle-aged, mad and moody Laurie Strode, who’d enlisted her belatedly spooked daughter and granddaughter to help her dispatch her brother once and for all. But because the intervening sequels had been decanonised – including the one where Strode decapitated Myers, she didn’t know what we knew – namely that the Shatner-mask loving psychotic is superhuman – knife proof, bullet proof, and sadly for Laurie, who tried to burn him to death at the last movie’s end, fire proof.

Kills promises plenty of death and it doesn’t disappoint – at least by that narrow metric. Myers butchers the firefighters who dutifully show up to save him, and he’s just getting started. From there it’s a gory, gruesome, butcher-a-thon; that’s sadistic violence and lingering injury detail; all the way to the fruitless finish in which Myers is confronted by a mob of weapon-brandishing Haddonfield vigilantes. I’m not spoiling anything by telling you they don’t stand a chance. The movie’s made this clear long before those final splatters by making Michael impervious to all weapons, tactics, and verbal threats.

It may seem odd skipping to the end but there’s really very little inbetween to talk about. Kills dumps its star in hospital, just as it did in the original sequel, and keeps her there for the entire running time. All Jamie Lee Curtis can do is look pensive, look embarrassed when the mob chase an obvious red herring to his death on hospital grounds, and look to the middle distance as she contemplates her brother’s almost supernatural survival instinct. The film moves her story on not one jot, and while it’s not advancing its heroine’s cause, it’s also not providing anything new. Halloween Kills is excess not success, and despite a few weak attempts to tie it to John Carpenter’s original, there’s no sense of a story deepened, just old haunts revisited.

In fact you have to wait until the movie’s final minute for something interesting to happen – a cliffhanger of sorts that promises the ghoulish, unstoppable Halloween Ends will provide the final confrontation between brother and sister we might have hoped for in this movie – had it not been conceived as a trilogy with one hour forty five minutes of filler required to bridge parts one and three. Laurie Strode hardly needs any further motivation to kill Michael Myers but the filmmakers have given her some anyway. A confrontation worth waiting for? Not on this evidence, but you can’t say Curtis’s character hasn’t earned her shot.

Certificate: 18 for retconing the sequel out of existence then stealing from it, William Shatner's face, and no sex.