Film Review: Fast and the Furious 9 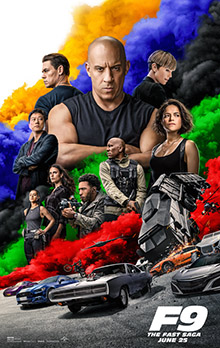 The pandemic did its best, but nothing can stop Vin Diesel’s vroom vroom franchise from returning – not you, me, or the end of the world. If you can remember Fast and the Furious 8, so have been chomping at the bit for the follow-up, you’re probably educationally subnormal. The rest of us, retaining only the sense impressions from previous races (literal or to save the world) need know only that Vin’s paterfamilias has tried to leave his life of espionage and dangerous driving aside, emulating Paul Walker’s off-screen retirement, but has no chance of succeeding.

Fast and the Furious 9 wastes no time dragging Dom and his family back into service, and so begins the pile-on of demented setpieces, technobabble and globetrotting, undercut with the series’ trademark nauseating melodrama. If every F&F movie needs one new structuring idea to obscure its own senselessness – Part 8 was about Dom turning bad for example – then we’ll take it, as it’s the closest thing to a story the formula allows.

Here, it’s the leading man’s backstory – hitherto alluded to in dialogue – that’s fleshed out, specifically the death of Dom’s father in a race, and the fallout with brother Jacob (John Cena in the present day) whose decision to wear a conspicuous crucifix around his neck across the decades helps us identify him. We need that help because Cena’s performance amounts to bare bones evidence of sentience – a bag of animated muscle and sinew.

If Jacob had a personality the feud with his brother, and determination to outshine him by acquiring a device that will give him control of the world’s computers, might have caught our attention. As it is, the twists and turns in the relationship – signposted like a burning car on a speedway, serve to present the illusion of a plot. It’s not a convincing allusion – about as photorealistic as Paul Walker in F7 – and consequently the movie never moves out of second gear. The lack of human interest stalls the engine and flips the vehicle.

Lesser reviewers will talk of shark jumping moments like a car in space, or an electromagnet so powerful it can suck cars through buildings, but such talk is redundant. This series lost any dramatic credibility several episodes ago. All that’s left now are the franchise fundamentals – muscle cars, muscles, and maguffins, offered with a conspicuous lack of style.

Quentin Tarantino proved that a movie can be fun and thin but also memorable when imbued with cinematic virtuosity – a determination to get the most magic out of every frame and splice. But the Fast and the Furious franchise, if it ever had an identity, has none today – it’s just a kaleidoscope of noise and incident. So familiar are the beats, so rote the action, so anaemic the patter, and so wan the characters, that you’re sure you’ve seen this one already. Eventually it will be impossible to tell them apart. We’re left with the same hope we had at the end of the last movie, that it will soon be over and Dom can enjoy a family barbeque, washed down with a bucket of Coronas – the official beer of the franchise – without being co-opted to save the world. He’s earned his rest and so have we.

Certificate: 12A for a car in space, Ludacris, and a young girl being the key to all this.