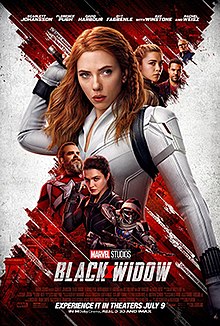 Florence and the Machine

Timing’s everything in life. If you doubt it consider Black Widow – the 24th marvel movie and an exercise in brand management and retconning. This is an odd entry in the never ending series that only exists because fans noted its lack and cried foul, forcing the studio to slowly, belatedly, bring it about. Consequently, an origin story for one of the original Avengers arrives approximately five years after its chronological window closed. Yet, despite being late, and arguably redundant as a result, this is nevertheless a movie of the now – the Phase IV opener that signals the studio’s new focus on identity politics; a harbinger of things to come.

Watching the result, which affirms the time honoured problems with Marvel’s output – namely corporate timidity and the blandification of the storytelling apparatus – one can sense Marvel’s embarrassment at being caught short in the female-lead superhero department, and their desperation not just to atone, but to push their feminist credentials to the front of audience consciousness. Black Widow must – is – a film about female empowerment and the defeat of male systems of control and subjugation. It’s a just a pity that’s all it is.

Scarlet Johansson’s Natasha Romanoff – already canonically demised, the character’s movie a distended afterthought – is the girl snatched from family life in Ohio, when Mum and Dad – agents on an undercover op – are discovered and hurriedly recalled to mother Russia. This opening – setting up Natasha’s protective relationship with her younger sister, and Mum and Dad’s ruthless pragmatism and privileging of their intelligence careers over any duty of care to their fake offspring, threatens to set up a novel and interesting dynamic for a Marvel flick – a family unit at odds with and threatened by the demands of espionage.

Unfortunately, no storytelling element can survive the studio’s demographic-minded, brand-aware approach to storytelling, that washes the material of two litys – vitality and personality. The prospect of sibling assassins, their childhoods stolen (along with their reproductive organs), compelled to join forces with their fake parents to save other girls from a similar fate (the programme has sinister sex trafficking overtones), is a tantalising one. But in Marvel’s hands it’s broad, glib and lifeless – a showcase for the studio’s unique brand of synthetic characterisation and workwomanlike composition. It’s as if someone ripped out the movie’s uterus.

Black Widow’s most interesting element is subsumed into a paint-by-numbers formula, the rigidity of which is faintly oppressive. This is a film with locked-in syndrome, cast and crew desperate to be expressive, but unable to think for themselves and showcase their true character, much like the slovenly Ray Winstone’s mind-controlled ladies.

There’s the Marvel clichés – a plot patterned on the genre fare of the ‘70s and ‘80s and referenced in-movie (in this case the Bond movie, Moonraker) that’s realised without the style or irreverence of the source material, the knowing self-referential humour – jokes formulated by AI, bloodless villains (will we ever get another Loki?), and an open-ended story. Then there’s the cinematic clichés full stop – and here the film is little more than a compilation. In fact, the incredible thing about Black Widow is that it may contain no original elements at all – a movie built entirely from stock scenes.

Even the movie’s standout element – its disdain for men, is now old hat, having been the conspicuous theme in every Hollywood “entertainment” over the last five years. The phalloids in Black Widow are either negligent, predatory or useless. Masculinity is the punchline to every joke. Patriarchal power, exercised abusively and to the detriment of nothing less than freedom of thought and expression, is contrasted with feminine attributes like patience, stoicism, fortitude, resilience, intelligence, and camaraderie.

Black Widow’s only gift to its audience, indeed its own point of interest, is Florence Pugh’s retrospective creation, Yelena Belova. She’s dry as dust but manages to be both a presence and a promise of better things – a character that can and should be developed in future instalments as her sister’s character conspicuously was not. But for God’s sake, Marvel, let writers write and directors direct, else the same computers that render half the movie may as well make the creative decisions too.