Film Review: The Godfather Coda – The Death of Michael Corleone 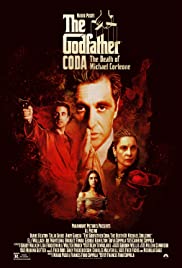 Looking back, over my shoulder

The temptation, with this re-edit of The Godfather Part III, is to wonder if we’re ready to be disappointed again. Made for mercenary reasons, rather than any creative impetus, the 1990 film has an air of irrelevance. Michael Corleone ended Part II isolated and vilified by sister, Connie, and feared by Kay, the estranged mother of his children.

His transition from war hero to, in Kay’s memorable phrase, “a common mob hood” was complete. No man so corrupted could be redeemed, and any attempt at reflection and absolution would be less interesting than the events that had necessitated such soul searching.

Part III proved this rather brutally. It meandered as it explored its underlying themes and ended with the heavy handed death of innocence; the punishment for a return to gangsterism. But hadn’t Michael already lost it all, long before he held his dead daughter? He said so, when reflecting with Kay years on from the events of the second film – “it was all for nothing”. Everyone he sought to protect through misguided psychopathy was either gone or heading out the door. It’s tempting to say the third movie was redundant, then. Less a coda than a reprise, long after the audience had left the auditorium.

Does the re-edit redeem the movie, if not the now titular character? Modest restructuring and the excision of superfluous scenes – particularly those featuring Sofia Coppola’s Mary reciting dialogue, make it more focused, less baggy. Mary’s less wooden (and consequential) and more the film’s awkward ingénue, as intended. Does the trimming make Vincent’s infatuation harder to understand? Certainly. It’s a pity Coppola had a bad turn to cut, rather than a professional one, say from Wynona Ryder, to add to.

The reordering of scenes gives the movie’s intersecting themes of organised crime and organised religion, both corrupt to the core, greater prominence. That these ideas are more literal than anything that appeared in the first two movies remains a problem; the symbolism of the climatic opera is as subtle as a bullet in the eye. Yet it’s not without intrigue – still a tragedy you can feel in your gut. It’s just not a story that matters.

What could Coppola have done with a third film? One of the movie’s false notes is the bastard Vincent embracing Michael as a mentor as he moves toward legitimacy. Would a power struggle within the family, driven by a sense of grievance about a stolen birthright, and a sense the old values were being repudiated, made for a more urgent movie? Imagine Mary and Vincent’s burgeoning romance under such circumstances. But that would have been a new story and Coppola, for good or ill, didn’t have one of those. Instead he got sentimental about the first two.

Coppola’s right to retitle the film now. This is an epilogue not a full-blooded sequel. Without a strong dramatic through-line its best claim to relevance is a mediation on what came before and the ultimate price to be paid. Its defenders can argue, with some force, that the movie Gods are cruel to dangle legitimacy and the love and acceptance of his notably artistic and altruistic children in front of Michael, only to rip it away in the final reel.

Maybe the three act structure demands blood for the slaughter of Fredo – that naïve and idiotic Corleone whose vulnerability, both to vice and predatory influence, Michael could not forgive. Maybe the bastard had it coming, just at the moment he was ready to hand off the murder and power plays to nephew Vincent, and enjoy the life of an ordinary multi-millionaire businessman whose fortune had been built on murder.

And yet, we come back to that second movie, and the way it so coldly, succinctly, suggested everything Godfather Coda literalises, in a signal shot; one the re-cut film effectively reproduces by way of a new ending.

If the death of Michael Corleone is now spiritual rather than literal, it was ever thus. That’s not to say that Part III, whatever you call it, is a poor film. Nor does it sully its predecessors by association. Its sin, in keeping with the religiosity that permeates it, is that it pulls us in to a psychodrama centred on Michael’s autumn years and the ties that bind, only to leave us exactly where Part II did, decades earlier. What then, was the point?