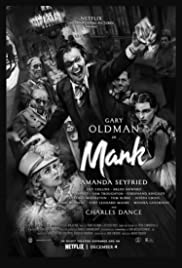 Violators will be Disciplined

It’s not hard to understand why some champions of auteurism – say, ooh, Mark Cousins, won’t like David Fincher’s portrait of Citizen Kane writer Herman J. Mankiewicz. It mythologises that most neglected of Hollywood professions – the writer – “just a writer” as the title character would say, and it fundamentally repudiates any notion of Welles’ singular genius. Rather, it suggests he acted as nanny to a child born of Mank’s politics, cynicism, and sexual jealously. He did a stupendous job, along with great collaborators like director of photography Greg Toland, but for Fincher Kane is Mank’s Shakespearian fuck you to William Randolf Hearst, and a swipe at the hack’s old boss Louis B. Meyer, who spent Hearst’s money.

That it’s a portrait, rather than a biopic, is due to Fincher’s decision to tell the story as a stylised pastiche of ‘30s cinema, complete with the novel spectre of affected sound – a tinny, echoey monomix that reproduces the theatrical echo of yore. It’s not a perfect tribute; the 8k black and white digital photography is too crisp to pass for the period, and incongruous swearing and semi-nudity (though welcome – more writers’ rooms would benefit from a topless typist with nipple tassels) reminds us this is not a lost film from the Hays Code era.

It’s tempting to ask why Fincher bothered with fidelity in some areas, only to abandon it in others. He held out for 20 years after all, so he could shoot the movie in vintage chiaroscuro. Netflix gave him a free hand and plenty of cash. Why not complete the illusion?

It rankles because the late Jack Fincher’s screenplay echoes the Hollywood era of moviemaking it painstakingly evokes with clipped, waspish dialogue; witticism piled on witticism. Mank, we learn, is a literary talent slumming it in a two-bit carnival town, and he knows it.

Gary Oldman’s portrayal is alive with the dry wit of a soak; the sadness of unrequited lust for Amanda Seyfried’s Marion Davies (his “silly plutonic affairs” in the wonderful phrase of wife, Sarah). “You’re a wonderful contrarian,” notes his future nemesis, Hearst, at a Hollywood dinner party in which his eyes dart around, judging the assembled company. As the movie progresses we’re inclined to agree, and reflect, as Fincher intends, that maybe only an iconoclast, and a washed up one at that, could have dared mount such a naked assault on the rich and powerful; an elite we’re told the socialist screenwriter vehemently distrusted.

It took a bold impresario, naïve enough to be brave, to make Citizen Kane, but it required the kind of guy who vomits up an expensive dinner and placates his host with the line, “relax, the white wine came up with the fish”, to write it. A movie that at first seems self-conscious and postmodern, like Trent Reznor and Atticus Ross’s light jazz score, settles to become a character study of great complexity and intrigue.

Of course it’s modelled on Kane’s trajectory – a life understood backwards, complicated by uneasy ties to industry and the subject’s single-minded approach to life, but this story behind the story is a quieter affair; the background guy who stayed in the background, yet managed to leave an indelible mark that outlived the objects of his ire. Who’d remember William Randolf Hearst today if it wasn’t for Citizen Kane? His great grandkids, maybe.

Mank’s a talky affair, and for some, accustomed to greater concision, that will be a problem. But for those inclined to look deeper, there’s a fascinating, wholly cinematic representation of a man whose formidable intellect, dulled by the film industry’s clean-cut escapism, and craving the stimulation of booze and gambling, found its outlet in the relatable story of an outsider who took on the establishment and won, but at a huge personal cost. His insistence on being credited, despite the career risks involved, may have been as much spite as pride, but it’s now lead to a second great movie. An embarrassment of riches.

Certificate: 15 for breasts in the writers' room, dinner party vomiting, and Orson Welles.