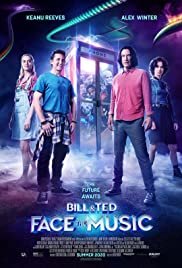 Billie and Thea's Most Triumphant Usurping

Warning: This review foretells the future, Dude. Don’t read on if you don’t want to know what comes to pass.

Bill and Ted Face the Music debuts 31 years after the original comedy featuring Keanu Reeves and Alex Winter as a pair of rock lovin’, nice but dim teens who learn, despite having no musical talent, that their sonic stylings will one day unite the human race in peace and happiness. Over two movies they composed not a note but time travel being what it is, that didn’t stop them using the technology to assemble historical figures so they’d pass history class and wouldn’t be separated, or being hunted by future villains determined to break their hegemony before it formed. 1991’s Bill and Ted’s Bogus Journey took them to hell and back, but ended with a satisfying coda in which they attained their iconic status and bequeathed their unifying rock unto the world. Story told, thank you and goodnight.

So what the fuck are original writers Chris Matheson and Ed Solomon doing, revisiting the characters in middle age and retconning them as failures who still have a job of composition to do? Face the Music plays like a series of nostalgia-fuelled lunchtime conversations between the two men; a warm, booze fuelled in-joke where they speculate on whatever happened to their most famous creations. You can almost hear them chuckling, wondering aloud what would happen if Bill and Ted had reached their fifties but had yet to achieve creative transcendence. Not a bad idea for a follow-up you might think, but it’s also pretty thin, and on the evidence of the long gestating flick-as-made, maybe more fun to joke about than to watch.

Woah, you say, does that mean this comic afterthought, that heavily samples the first two films, is most unfortunate and sullies what’s come before? Surprisingly, no. It’s upbeat, optimistic, and the titular characters retain their naïve but earnest likability. Sure, Keanu may look stiff and awkward, unable to regress with the ease of Alex Winter, but the filmmakers haven’t executed a disastrous shift in tone or outlook; this isn’t a conscious repudiation of the original films. But it does share one deadening characteristic of modern legacy sequels: it contrives to make the male characters of old redundant. That’s right ‘80’s dudes, your best days really are behind you and your life no longer has meaning, because your kids have replaced you.

Whatever the promise on the poster, the message of the movie appears to be that rock remains a young person’s game, because it’s Logan and Preston’s daughters Thea and Billie (gender flipped reincarnations of the originals – who even have a female Rufus in tow) who actually save the world. In fact, it’s not until an hour or so into this breezy and short sequel, that we realise it’s the next generation that’s doing all the work.

The ostensive A-story, with Bill and Ted in search of their career defining hit, a song which, for inexplicable reasons, is required to save the fabric of reality, not just society, is a largely irrelevant side show. While they meet iterations of themselves and scratch their heads, wondering why they remain uninspired and unremarkable musicians, the girls quietly form a supergroup featuring the likes of Mozart and Jimmy Hendrix, charm William Sadler’s returning incarnation of Death, and orchestrate the ensemble at Earth’s hour of need. Bill and Ted, whose job it was to work out they were largely surplus to requirements, end the movie as a support act. Turns out that whatever Rufus told them, or whatever we were led to believe, back when men could be heroes, the Wyld Stallyns’ real contribution to history were two lucky acts of ejaculation.

Consequently, Bill and Ted Face the Music, though good natured to a fault and careful not to undermine the appeal of the original characters, is a modern movie disguised as a reprise of two old ones. There’s still room for wit and irreverence in the world of B&T, but those letters now stand for Billie and Thea. They’re highly likable, patterned as they are on their Dads, but we came for an original song not a cover, and as such you may well face the music and think it was a redundant sequel that made our old friends redundant. Bogus.