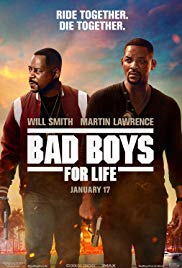 Who would have dreamed, back in 1994, that we’d still be anticipating a Bad Boys sequel in 2020? Surely movies would have moved on by then, and besides, the stars would be in their fifties wouldn’t they? Far too old for this shit.

Well, they are that old and the movie allows for the desperate reprise of interest in their affairs by having one of them, the now portly and sedentary Martin Lawrence, be on the cusp of retirement; a plot point so old and such a genre cliché that it should be in a cab with Lawrence and driving away from this movie. But no, he’s in it, and his brand of irritating smart mouthing remains the counterbalance to Will Smith’s assured cockiness. Smith, who’s now so old that it’s necessary to digitally graft his face onto a younger man to facilitate a single fight involving some running and jumping, is still a convincing Bad Boy – but the audience will notice a distinct lack of sprinting in this 2nd sequel, slow motion or otherwise. In one scene he’s even wheeled through the action.

The world needs a third Bad Boys movie like it needs a Transformers reboot. This is brand nostalgia and extension plain and simple. The plot, revolving around a sadistic Mexican cartel boss and her avenging son, is at least an unconventional way of extending the hero’s family so his progeny can do the difficult stunts in future sequels. Do we believe Smith’s Mike would get involved with a drug smuggling family, before joining the police force? His lifelong partner Marcus covers it with a joke, that he always dressed like a drug dealer. Maybe a movie like this needs no more seasoning than that.

It’s not just the Boys whose activities are reduced in this Bay-less sequel, it’s also the budget. New directors Adil El Arbi and Bilall Fallah save their cash for a blow-out finale inside a derelict Mexico City mansion. While we wait, there’s a few perfunctory sequences shot on ugly DV, and a lot of talk about getting old and settling for a quiet life. Personally, I preferred the Boys when they were young and care free, and the characters understood it was better to burn out than fade away. Filmmakers used to understand that too. It’s that understanding I’m nostalgic for.

Directed by: Fallah and Arbi

Certificate: 15 for Will Smith improbably copulating with a sadistic Mexican crime lord,  dull new characters, and an open door for a Bad Boys 4.