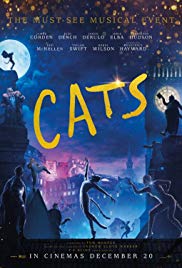 It’s easy enough to confuse Tom Hooper, director of Cats, with Tobe Hooper, the horror helmsman behind Poltergeist and The Texas Chainsaw Massacre. Tom’s flick doubles down on that confusion by being eye-widenly horrifying. His adaptation of Andrew Lloyd Webber’s stage musical, itself a flamboyant bastardisation of the work of T.S. Eliot, who fortunately died long before he saw what musical theatre was capable of, is an uncanny, meandering, creepy spectacle in search of that effusive dramaturgical concept known as story.

Hooper’s sometimes feminine, sometimes androgynous, always genital-free anthropomorphised felines, glide from number to number without hitting a single story beat, dwarfed by sets of varied scale. They’re as large as a human or the width of a rail; a human world apparently obsessed with pussies – for the puns are emblazoned on every billboard. It’s as if a poem was adapted to become a glossy but empty stage spectacle which in turn became a surrealist splash of thin ejaculate. There’s an audience for this shit but you certainly wouldn’t want to spend an evening with them.

There’s much to set your vampiric incisors on edge here. Behold, the continued efforts of James Corden and Rebel Wilson to fat shame themselves and all the podges in the audience!  When will Corden, who once quit the British soap Hollyoaks in protest at being written as a rotund figure of fun, stop appearing in movies as an object of derision who stuffs meat into his maw? Wasn’t The Three Musketeers bad enough? Shudder, as Rebel Wilson scratches her pussy’s pussy, then grabs a line of sausage that looks suspiciously like an erect penis. Cats is rated U for God’s sake.

The movie camera sees better and closer than the eyes sunk into the faces of a theatre audience. Stagecraft ported to the big screen often looks ridiculous and Cats underscores this disconnect between the theatrical suspension of disbelief and cinematic artifice with merciless clarity. The movie might have worked as a clay animation feature, or some form of computer augmented puppetry, but as a live action stage show with Hooper’s camera pushed right up into the actor’s, er, pusses, and at safe distance, to take in the matte painted backdrops, it unnerves rather than enchants. It’s a movie so overwrought and garish that it makes the case for toxic masculinity. You come away convinced that camp ruins everything.

Still, Cats isn’t completely worthless. As a cultural artefact it’s fascinating – excellent shorthand for all the sentimentality and nonsense we project onto our pets, including the ludicrous notion that these automatous predators have human personalities and emotions. You’ll never forget it – though you will try.

Certificate: U for hubris, insulting the memory of T.S.Eliot, and Ray Winstone.