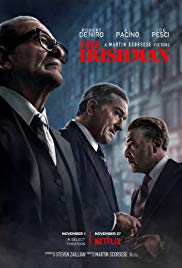 A History of Violence

Martin Scorsese, like Robert de Niro’s Frank Sheeran, is an old man. And like the title character in his late-career mob epic, he’s in a reflective, conscience mapping mood as the end approaches and some cock sucker, probably a Netflix exec, reminds him that everyone and everything he used to know – namely people paying to see a real movie at the cinema, is gone.

When the old studios used to bankroll Scorsese’s wares, rather than the streaming service that more than any other has accelerated the death of the theatrical experience – Marty flirting with the devil as surely as any as gangster, he gave them artful murder; morality tales to be sure, but nevertheless character studies that wallowed in the world of organised crime, it’s pornographic violence playing to the audience’s bloodlust.

The Irishman’s an older and wiser man’s film, and not just because it’s stocked with geriatric marionettes, liberated from their display cases in the museum of movie legends, their strings digitally removed. There is something uncanny about watching lumpen old men like Joe Pesci and Al Pacino trying to move dynamically through violent or kinetic vignettes – the faces ILMed with various degrees of success, allowing you to occasionally suspend your disbelief. But the film’s best special effect, and the most unnerving, is Scorsese’s direction. His hallmarks are all in place – the beautiful tracking shots, meticulous compositions, great performances ripped from great actors, but though it looks and feels familiar for a time; like a directing droid’s rendering of the master’s style, it slowly transforms, before your digitally glazed eyes, into an altogether more sombre and introspective affair; a human life in deep focus.

Early Frank Sheeran is the quintessential Scorsese character – he’s brash, proud, violent and damaged. But he’s also a walking critique of all those colourful criminals that popular culture have made antiheroes. There’s no blaze of glory for this man, no dying with your boots on, rather an exploration of confused morality over time in a dysfunctional and compassionless society.

When we meet Frank as a young man he’s taking bribes to steal meat from his employer and sell it on the side. When caught, he tells his lawyer, “I worked hard for them when I wasn’t stealing from them,” and no, of course he won’t name names. That, it turns out, is the doublethink and deference to higher ups that will mire Frank in mafia turf wars, culminating in the ultimate test of loyalty; a murder that costs him the love of Peggy – the daughter Scorsese employs as a moral weathercock and audience proxy, who watches the disaster unfold in silence.

There’s bloody violence, but not the way you remember it. Rather it’s shot like the recollections of a man who can’t quite bear to linger on the memories for too long. Scorsese keeps his camera at distance, or arrives just a second too late to see the worst injury detail, or moves his camera so he doesn’t have to linger on the face of the girl who watches her father being gunned down as they sit down to a birthday dinner.

For some aging directors, Spielberg for example, this might be marked as timidity – a grandfather directing with the grandkids in mind. But here it feels like a conscious decision not to be gratuitous, not to be exploitative. Frank Sheeran is free to employ a double standard – to fight fascism with the fascistic murder of war criminals, then transfer that moral ambivalence to the world of organised crime; family, fraternity and God occupying the same headspace as psychopathy; but Scorsese can afford himself any such hypocrisy. The film works so well because Peggy’s quiet judgement gets louder and more insistent as the story progresses. By the end, it’s all Dad’s left with.

And it’s that epilogue, with Frank in his dotage – lonely and hallowed out, that stays with you long after the credits have minimised on your TV and Netflix’s algorithm has suggested you watch something similar but less mature, and almost certainly less interesting.

Sheeran’s tragedy is to vie for status and respect at the cost of a happy home and family – the bread and butter institution he ostensibly fought for in wartime. Scorsese’s triumph is to fashion a speculative fiction that doubles as both as a lament for a society and political culture in thrall to dirty money and junk values, and a full stop on his signature crime pictures; a poignant and audience admonishing final chapter. Leave the bedroom door open at night will you? There are monsters out there.

Certificate: 18 for being bankrolled and largely only seen on Netflix, signalling the death of old school adult filmmaking for theatrical exhibition as we know it.