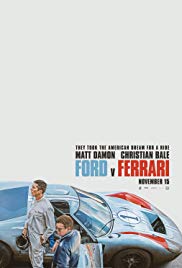 Whatever you want to call it – Ford Vs Ferrari, or Le Mans ’66 as it’s been rebranded in the UK to add a little continental sophistication and specificity to the main event, James Mangold’s racing drama is the kind of glossy, star-driven, er, vehicle, that used to be Hollywood’s bread and butter, but these days is a rarity because fucking idiots like you have stopped going to the cinema for the sake of it, or because you like certain actors, and have instead opted to consume most of your adult orientated stories on Netflix and the like.

That’s right, because of your imbecilic patronage of superhero movies and franchise flotsam, this rock solid studio fare, resplendent with great performances, melodramatic seasoning, and practical action (augmented with CGI), is nostalgic in more ways than one. Fortunately, Mangold hasn’t just replicated the tone, structure and aesthetic of these flicks, he’s reproduced the quality too. Le Mans ’66 is a two-and-a-half-hour movie that, unlike Ford’s prototype racer, never drags.

Key to its success, other than the on-point pacing, excellent production values, and meticulous staging, are two warm and engaging performances from leads Matt Damon and Christian Bale. As Carroll Shelby, the former brings a little all-American can-do spirit to the role of the former racer, grounded by heart problems, who accepts the Ford motor company’s challenge to build a Le Mans winning car to beat their hated rivals at Ferrari, after Ferrari himself calls Henry Ford II, a fat Henry Ford wannabe.

Bale, as Midlands émigré Ken Miles – who thanks to a screenplay by Jez Butterworth, spends the movie peppering his speech with phrases like “face like a smacked arse”, is the headstrong but likeable driver whose independence of mind and freedom of spirit clashes with the corporate mentality of the sponsoring car manufacturer.

In fact, in this movie released under the 20th Century Fox banner after its acquisition by Disney, the recurrent theme is that of the team of industry professionals, working under experienced leadership, fighting off the imbecilic and misguided directives of the parent company whose interests are crass and commercial, in stark opposition to those who love the craft and essence of the thing they seek to perfect.

You probably won’t see Le Mans ’66, because you don’t pay for this sort of thing anymore, but you should because, like the best crowd pleasers, it’s fundamentally about the ultimate synergy between humanity and technology, which at its best, creates beauty. Thrilling, heartfelt stuff.

Certificate: 12A for corporate interference, a lawn fight, and sticking it to the Italians.