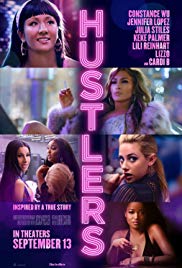 This slick, “Wombs of Wall Street” – hustle and flow drama, replete with Scorsese-like smooth tracking shots, shifting time signatures and voice over narration, asks us to empathise with a pole dancer just trying to earn enough to support her old grandmother (later young daughter too), who hooks up with an older pro and ends up drugging and scamming rich men for big bucks.

Like Wolf of Wall Street it’s based on a true story, and like that movie, you can like the hedonistic, materialist characters and vicariously enjoy their audacity. But the real test for the audience’s moral compass is whether, following the drugging, whoring and later sociopathy toward victims who went out looking for company and ended up jobless and homeless, you’re still on side when the end credits roll.

To help you get there the movie gives you two vivid and nuanced characters in the form of J-Lo’s battle hardened, if not entirely hard hearted man milking veteran – whose rationalised the whole thing as punching up and evening up, and Constance Wu’s apprentice – who despite falling short of actually opting out of screwing men over, does at least find her conscience as the scam escalates and shit gets real.

If you accept the various cocks, some of them odious bankers, others just unwitting sad sacks (though the movie is careful not to feature any of those until the job of establishing the audience’s relationship with the women is done), had it coming – that this is indeed a form of wealth redistribution from rich to poor, then all is well. However, if you think that the values of hustler and victim are essentially identical; the key point of differentiation being power and opportunity, then the movie’s emphasis on the hustlers being a substitute family, their kids sentimental props, looks as dubious as their patter.

Still, it’s a good looking flick; one that convincingly sells the sex, style and sleaze that populates the girls’ milieu. If the movie’s ultimate aim is to understand how this seedy scam came about, it succeeds. If the hope is to generate sympathy – well, that would be a kind of con, wouldn’t it?