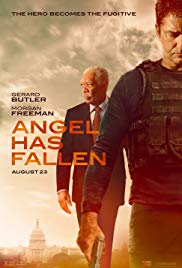 Millennium films don’t have many franchises so it’s not a shock they’ve made a third trip to the well to bring us the further middling mid-budget adventures of super secret service agent, Mike Banning. You’ll recall he saved both the White House and London from terrorists. Or maybe you don’t, as the bus advertising reminds you that this is the third film in the series; an implicit acknowledgement from the filmmakers that they’ve made a derivative and therefore forgettable product.

As we re-join him, Banning is still looking after the president but is past peak form, struggling with a bruised brain and dizziness, probably on account on all those times he’s been punched, manhandled or shot at. When private sector mercenaries launch an assassination attempt on President Morgan Freeman, Banning is framed, arrested, but escapes thanks a plot contrivance, finding himself on the run and forced to prove his innocence before the bad guys finish the job and kill a comatose Freeman, who’s wisely chosen to spend most of the movie in bed with his eyes closed.

Initially we assume we’re being set up for a re-run of The Fugitive, albeit with far worse editing and cut price Eastern European sourced CGI, but Angel has Fallen has no such mystery solving ambitions. The scenario allowed for two interesting possibilities – either that Banning would uncover a conspiracy that goes all the way to the top; the audience learning the culprit’s identity in the third act; or that Banning, brained and subject to blackouts, might actually be guilty without knowing it – a man hunting himself.

Instead the movie goes for neither, signposting its villainy in the first five minutes, then revealing the shape of the conspiracy before the chase has barely started. Yes, there’s a man behind the man, but sourced from central casting as he is, there’s never any doubt as to who the mole in the presidential administration will turn out to be.

In place of intrigue or mystery the movie delivers kinetic knockabout action and a gruff, vagabond Nick Nolte as Banning senior – the producers desperately hoping that he can bring to to this third film that same pixie dust that Sean Connery spunked over Indiana Jones and the Last Crusade. Oddly enough, his relationship with Butler is probably the movie’s greatest  asset, providing as it does a little dry humour and character conflict.

Ultimately, Angel has Fallen probably pips the last instalment, being less messy and more wry, but this is still a deeply unimaginative series, that’s been lucky to make it to three flicks and should now, like Banning, gracefully retire from the front line.