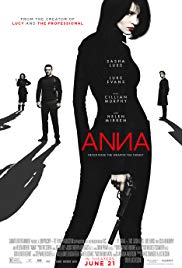 Warning: This review alludes to aspects of the convoluted plot.

Luc Besson, whatever you think of him, knows what he likes – young and comely assassins, European locations – well, Paris, and plenty of stylised, conspicuously choreographed violence. Anna delivers all these time worn ingredients but it’s missing a couple of things that elevate this kind of brutal thriller – namely coherence and structure.

This is a Cold War actioner that’s obsessed with pulling the rug from under its audience; rabid at the prospect at re-contextualising chunks of plot to give the illusion that this is an exercise in narratological sophistication. Unfortunately, Besson rather overplays his hand. It might have been better to let the movie run on for longer than 20 minutes before executing the first flash back and reordering of events, as this would have given the audience the chance to buy into, maybe even invest in a certain story before learning they’d been had. But by the time this has happened on three or four occasions, one’s forced, almost against one’s will, to anticipate the switches, which alongside some unlikely complications – Anna bedding the top men in the CIA and KGB respectively, starts to blow the movie’s cover as a serious thriller.

Besson, it seems, had certain preconceived ideas about the film’s story which included modern thriller elements entirely at odds and anachronistic with the movie’s late Cold War setting. These days it’s de rigueur for characters in espionage flicks to exchange words on mobiles against scenic backdrops, or to upload state secrets to USBs, or to toy with data stored on laptops, but all of this, in a movie set between 1985 and 1990, is head scratchingly out of place.

Anna sits in a drag Moscow apartment, circa 1989, apparently with access to a modern-ish laptop and online application form, despite the internet not yet being available. Later, in 1990, she’s the first person in the world to own a Nokia 3310, which she uses to call KGB man Luke Evans, presumably using a non-existent network. Later still, she’ll steal secrets using a large USB stick and so on. Why set your movie in this period if you’re not interested in playing with the era’s technology and limitations? Apparently, Besson thinks the audience is stupid and won’t notice.

Perhaps the answer is that Besson thought the movie’s unreconstructed gender politics would play better in a period movie. There, in the safe house of the past, he’s free to lust after his lead, have her objectified throughout, and throw in the odd un-PC barb about uglies like Anna’s handler, a dowdy Helen Mirren. But if you’re going to do a period piece you have to go all in – not straddle old and modern sensibilities as Besson does here. The result is a movie that feels oddly jarring; a story that’s unanchored and unreal.

Certificate: 15 for historical inaccuracies, the lead character used as an audience honeytrap, and Helen Mirren's glasses.