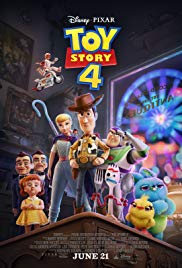 By common consent Toy Story 3 was a hard full stop on a once groundbreaking series (that’s technologically natch – no storytelling leaps and bounds here). Andy’s toys, bless their inexplicably sentient non-existent hearts, found a new owner; a girl who’d love them as only a pre-schooler could, and that we were assured, was that. So what the fuck is a Toy Story 4 for or about? Well, says Pixar, what if young Bonnie didn’t adopt the same Toy hierarchy as her predecessor? What if, in an echo of the original film, Woody – chief plaything, found himself redundant?

Perhaps it was inevitable that Pixar would find the most subtle way to ride the gender flip, identity politics train, for conceptually they have more time to think about these things than most. So when Woody finds out that a little girl is more interesting in her cowgirl than him – going so far as to give Jesse his Sheriff’s badge and leave him in the cupboard, he resolves to make himself useful, wanted or not, and self-anoints as the owner’s overseer on her first day in Kindergarten. This results in a new toy being created, Forky (a spork with a broken lollipop stick for feet and wire band for hands) who instantly becomes the new girl’s favourite. It’s therefore first a film about bringing on a newbie for the benefit and pleasure of the little girl, educating him in the ways of Toydom, then retrieving him when, inevitably, he’s lost on a road trip.

The toys getting toys back (and overestimating their long term importance in the process) is essentially the plot of all the Toy Stories, but it remains fresh here thanks to a few smart choices in the writers’ room. There’s a range of new, enjoyable characters, a romance for Woody and old toy, Bo Peep, that pays off emotionally, and some exquisitely rendered new environments which magically, in the best Disney tradition, recast the familiar as heightened and magical. An antiques shop becomes something of a sinister neighbourhood for lost toys, complete with kingpin and back alley club, with the fairground and RV Park beyond a city for toys waiting to be “won” and given homes, as well as those wanting to be free to live independent lives.

Against the run of probability, Toy Story 4 manages to be the concluding chapter audiences didn’t know they wanted. It provides a resolution for all the toys, which though predicated on the same idea as previous films, namely each toy finding their purpose, gives that theme expression in a way that feels more individuated to the characters and satisfying. It even manages to incorporate a nice little flourish centred on the ontological nature of the series, namely living toys. “How am I alive?” asks one. “I don’t know,” replies Forky. That, of course, is the perfect (and only) answer.

External to the narrative is the fascinating irony of such computing power and technical wizardry being employed to celebrate the low-tech, analogue and organic. It’s hard to decide if this is guilt manifest on the animators’ part, or a joke at the expense of luddites, but it does leave you thinking about how, in the space of 25 years – Toy Story’s gone from a novelty to the ultimate expression of modern filmmaking practice. I hope I wasn’t the only one who felt uneasy as the final credits rolled.

Certificate: U for a u-turn on Pixar's policy of ending the story with Toy Story 3.