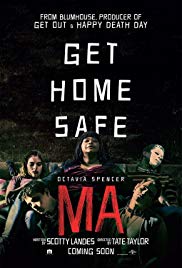 Down with the Kidz

Warning: This review discusses the plot and reveals the fate of certain characters.

Somewhere, in this morass of Blum House schlock, is an intriguing horror premise about a bullied girl in a small town who grows up, meets the teenage children of her tormentors, who are now the age she was when they sexually humiliated her, and befriends them with the intension of doing awful things to punish the parents by proxy. Throw in a sub-plot about her own meek daughter being medicalised and imprisoned at home so she won’t suffer her mother’s fate, and you’ve got the constituent ingredients of dark and disturbing psychological thriller with psychosexual seasoning.

But this is Blumhouse, a den of cheap thrills, so Ma has no greater ambition that to deliver a b-grade teens in peril picture, with an original, rambunctious ghoul at the centre – Octavia Spencer’s dead-eyed matriarch, capable of flipping from teen friendly good time girl to gun pointing psycho at the spin of a half-empty beer bottle.

Ma plays like a rushed affair; a movie that just about hangs together and ultimately hits all the necessary story beats, (though not always in the right order) but would have benefited from a more considered treatment and injection of all that all important horror staple, style.

Certificate: 15 for misuse of veterinary premises, living in the past, and being resident in the world's most combustible house.