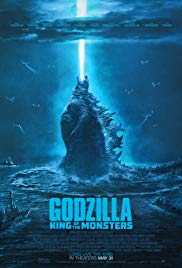 Who asked for a Godzilla shared universe, was it you? Based on nothing more than an above average gross for a movie that had little going for it once Bryan Cranston’s character died, and undeterred by the diminishing returns of sequel set up movie, Kong: Skull Island, the filmmakers have persisted. Now, we have a Godzilla sequel with even less human interest than the original; the movie as expansion pack, and it’s just as lifeless as you feared a movie could be that centred on giant monsters toppling cities.

You can’t blame Warners and Legendary Pictures for wanting some of this sweet cinematic universe action, but surely to God someone should have asked whether there was an appetite for a series based on monster fights. Is a set of films with a human component this incidental a formula for longevity? You’ve seen one creature pulverise a metropolis, you’ve seen them all. Where’s the beef, the emotional connection?

King of the Monsters tries to fill this void but it plays like an afterthought. All the requisite beats are there – a family in peril, a mother dealing (badly, genocidally) with the loss of a child, the estranged and embittered father, but their scenes are so one dimensional, so placeholder, that they act as little more than filler – the gaps between attacks.

With a major script overall and direction with intent, the story of well intentioned, though nutty eco-terrorism gone awry, might have been intriguing. But poverty of characterisation induces lethargy and that goes double for the bit characters lost or self-sacrificing along the way.

The unintended consequence of this void at the film’s heart is time to concentrate on the plot, and here the movie offends with its boorish finger wagging about humanity destroying the planet (in a film that gets off on the same) and the veneration of eastern mythology and mysticism; Western enlightenment values gently admonished as they always are in flicks primarily aimed at non-Western audiences. Will any monster save us from this in years to come?

Ultimately, this is a consciously episodic sequel that’s only selling point is a broadening of the ethos ahead of the next part, Kong Vs Godzilla. Will any interest in this franchise remain when those two historic monsters finally meet? There may be more to attract the casual moviegoer, but the series’ long-term prospects look bleak: they’ve already run out of story.

Certificate: 12A for scenes borrowed from Aliens but in a sanitised movie, the absence of human characters, and bad weather.