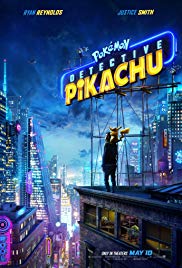 Warning: This review alludes to a plot twist.

How to review a live action Pokémon movie? The capsule version would read thus: Roger Rabbit with Batman’s ending, sans the grit. We could talk about the inspired choice of Ryan Reynolds to add a little personality and wry humour to what would otherwise be an insufferably cute title character in a movie so stuffed with saccharine sprites and child-friendly sentiment that it would otherwise be unbearable for anyone over seven years old.

We could say Justice Smith is good casting – a likeable foil for Reynolds’ piss-yellow rodent, or whatever it is. We could say Bill Nighy adds requisite kook and twitchiness to the villain. In fact, we could and will say that it’s a shameless attempt to sell toys and games given a sense of cinema by shrewd casting.

Only the angriest humans could fail to give Pikachu his due – this is a likeable children’s adventure which has a semblance of plot and some eye popping art direction, even a stand out visual effects sequence that sets up a joke about climate change. Trump supporting parents will no doubt be aghast at this crude attempt at indoctrinating their sprogs, only to rush out and buy their babies the kind of Pikachu bed featured in the film’s fully synergised, product saturated world. But parents rushing to take their kids, or even adults taking themselves whose bedrooms are stuffed with soft toys, should pause to consider whether this wholesome corporate junk is healthy.

When we say healthy, we don’t mean, should they be drawn into the world of corporate synergy and franchise extensions, rather, should we be encouraging fledging film goers to embrace commercials masquerading as movies? And didn’t the flow from story to merchandise used to be the other way round? In a Hollywood propped up with Chinese money, mostly foreign owned, with the prevailing orthodoxy being that all movies should be as bland and homogenous as possible in order to play well in global markets; a business imperative that divests them of all personality and cultural specificity, does it matter anyway? Perhaps we’re talking about Pikachu emblazoned deckchairs on the Titanic.

There’s only going to be more big-budget product extensions like Detective Pikachu, only more toy company checklists with retrospectively grafted plots to give the impression of narrative. How to tell today’s tots that once going to the movies was about selling them stories not related products?

Certificate: PG for mocking mime artists, a terrifying glimpse into an East-West fusion future, and a train that carries an expository film on every journey.