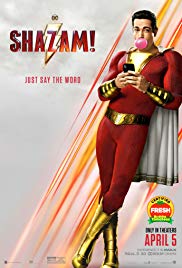 Another week, another superhero movie – this one a bucking young foal from the DC stable. Does it matter what it’s about? Not really. It’s a simple story – good wizards vs bad, with an odd pseudo religious import – a man possessed by demonic manifestations of the seven deadly sins. We know not how or why and care not a jot. Add to this the setup from Big and other staples of the long defunct but suddenly re-emerging body swap sub-genre, and you have a very odd brew indeed. In the right hands, a potentially idiosyncratic and wry spin on the genre.

Unfortunately, Shazam’s real mission is to further shift the DC extended universe from the joyless, nihilistic, albeit highly stylised dumps of the Zac Snyder era, to something resembling the frothy but empty ‘80’s inspired vanilla fudge that is the MCU – cinematic tofu that’s proved to be a general audience’s manna.

Shazam isn’t quite as middle-of-the-road as some Marvel filler; it has just enough charm and gentle humour to be enjoyable, the way a hot milk drink eases the transition to sleep, but if this is a harbinger of the series’ new direction, with the ambition no greater than generating merchandise spin-off opportunities, some of which feature in-movie as background, then the choice for super fans will be two mega-franchises offering expensive feature length instalments of episodic television.

A whole generation will lap this stuff up, unaware that superhero movies used to be self-contained, cinematic events in their own right. They’ll be viewing this shit in their own corporate curated phantom zone.

If Shazam has anything going for it it’s finding a tone and an outlook that perfectly captures the genre from a 14 year-old boy’s perspective. Keeping it light, colourful and above all, intimate in scale, restricting the action to the hero’s locale and his social milieu, makes this the opposite of the bombastic, intensely self-important approach of early series’ entries like Man of Steel and Batman V Superman. It also allows the movie to evoke a more innocent era of superhero flicks, when the stakes felt more personal, the audience proxies were likeable, and the fantasy felt like an organic extension of childhood imagination. Getting this right liberates Shazam from true mediocrity and gives it as much heart as its mechanical ontology and corporate overlords will allow.

Would it have had more personality and subversive quality had it been made 30 years ago? Undoubtedly. But if Shazam encourages today’s DC tadpoles to one day seek out its cinematic precursors, including a movie where Superman shows up both figuratively and in his physical entirety, then it will not have been shot in vain.

Certificate: 12A for DC merchandise, negligent parents, and Henry Cavil being too lazy to make a cameo.