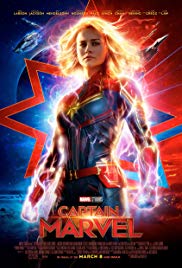 Trouble at the Top

One throwaway gag early in Captain Marvel alludes to the dark fate that stalks every cinematic sure thing. Brie Larson’s amnesiac, trained by an alien species called the Kree to fight galactic terrorism, literally falls to Earth, circa June 1995, and into a branch of Blockbuster. There she catches a peripheral glimpse of a promo stand for Schwarzenegger’s True Lies, and blows his cardboard head off with her proton charged hands.

It’s not a well-edited joke; the timing’s off, in keeping with the rest of this assembly edit of a movie, but as a symbolic harbinger of Arnie’s box office future, it’s vivid. The mid-nineties saw the decline of a seemingly invulnerable star’s career – a dead cert becoming a dead weight. He’d been on top for around ten years – about the same length of time Marvel Studios have dominated the contemporary box office. Is the film that bares the brand’s name the moment they blew a hole in their own longevity?

Once you’ve seen it, it’s easy to forget that this run in to Avengers: End Game, the forthcoming break with the series’ first epoch, was billed as an introduction for an all-powerful character who would, one presumes, spearhead the New Avengers line up, and lead the series into its next unbroken run of guaranteed blockbusters. Ms Marvel was tipped as the MCU’s nuclear option, the emergency summons that Nick Fury was only authorised to page when all else failed and his assembled mightiest heroes couldn’t get the job done. Thus, the world awaited her origin story and clash with Thanos with anticipation. But now we’ve met her, that hype has turned to deflation and the only question is, who dropped the space ball?

Captain Marvel, the MCU’s new talisman, and the character designed to soften the blow of losing bankable heroes like Iron Man and Captain America, is a dud. For why? Because Brie Larson is miscast in the lead.

If Captain Marvel had been lovingly crafted and shot with style, perhaps the void at its heart would have mattered less. But Larson’s fighter pilot, turned galactic defender, is the central character a characterless movie deserves. Brie’s Carol Danvers is a lifeless, mirthless bore; a hero that never transcends her powers or the virtues attributed to her by other characters, to shine as a personality in her own right.

We’re told, by unreliable witness Jude Law, that she’s too emotional, and very funny. But Larson, underpowered and inanimate, the greatest victim of the perfunctory direction that dogs the entire enterprise, can’t sell a feeling or naturalise a quip. In short, she’s terrible, and that goes double for many of the static and mechanical scenes in which she appears.

What went wrong? Perhaps it was the nature of the origin story, casting Danvers as a blank slate for the majority of the running time. Perhaps, the competing demands on Larson’s characterisation – vulnerable and invincible, proved irreconcilable.

Ultimately, the lack of a personality at the heart of the picture seems to have a knock-on effect. Samuel L. Jackson and Ben Mendelsohn, normally big and reliable presences in this kind of corporate confection, run in second gear, as if the directors instructed them to go to power save mode, so as not to upstage the cat.

That’s a shame because Captain Marvel is a movie crying out for excess. So vanilla is the plotting, so bland the broth, that anything – a breakout comic performance, an outrageous setpiece, might have given it the era appropriate feel it so conspicuously lacks. Instead it evokes the worst of the ‘90s – b-movie crud like Independence Day, sans the zany stock characters.

The MCU, at its worst, is a risk averse sausage factory that riffs on the hits of a generation ago, without the style that made those movies memorable to today’s hacks. Captain Marvel epitomises this approach, and it comes at a crucial moment in the franchise’s development, where a big character with a memorable introduction was required to both set up the next film but also reassure fans the series’ best days weren’t behind it, and the future wouldn’t belong to second string heroes like Ant-Man and Black Panther.

Instead, Captain Marvel’s third act, showcasing the extent of her abilities and her immunity to alien military might, falls flat as the previous hour and forty minutes have done nothing to establish the character as either an endearing or subversive presence.

Five years after Terminator 2 Arnie was starring in Junior and Jingle all the Way. Will the Marvel movies of 2024 instil the same sense of foreboding and lethargy? Unless the studio start taking creative risks and hiring big personalities to occupy both sides of the camera, decline and discontinuation, not big box office, might become Marvel’s new sure thing. Kevin Feige better page some talent. Fast.

Certificate: 12A for a point and click approach, low key performances, and jokes about dial up connection speeds.