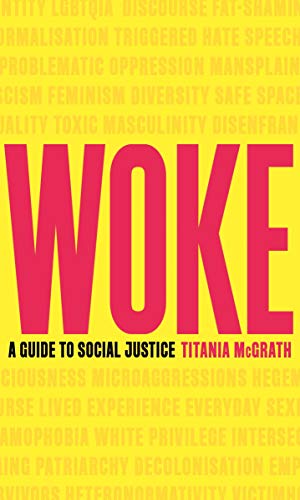 Warning: This review is written by a white male and consequently all views expressed therein should be instantly dismissed.

Titania McGrath is a satirical character who takes herself so seriously than she aggressively rejects labels like “satirical character” as this is tantamount to being unpersoned. Not every Twitter spoof account gets a spin-off book. Nadine Dorres being the notable exception. But Titania, seizing the mantle of aggrieved, spoilt, middle class keyboard activists everywhere, who currently outnumber docile sheeple – the custodians of the old patriarchal order, three to one, is a timely parrot, squawking idiocisms and self-righteousness anger born of liberal tinged ignorance like Maya Angelou’s metaphorical caged avian.

In fact, identifying as the symbol of a black woman’s oppression would be the height of respectability for a feminoid who presumes solidarity with tyrannised people everywhere – except men, who are predatory, libidinous scum who rape their mothers at birth and continue in much the same vein until their premature deaths from heart disease. “The history of womankind,” writes McGrath in full menstrual flow, “is like a sand beetle attempting to traverse the Serengeti with a horse’s bollock upon its back.” And who hasn’t thought just this, time and again, when confronted with today’s hollowed human condition – the bitter legacy of thousands, maybe billions of years, of male hegemony?

If we imagine there was a writer behind Titania, with contempt for the Woke stylings of Laurie Penny, Owen Jones, Afua Hirsch and the like – who suspected said commentators of being privileged, sanctimonious hypocrites who’d made careers from repackaging their own half-baked prejudices and bigotry as virtue, so quoted them liberally (how else?) throughout the text, what kind of writer would they be?

The humour police would be looking for someone far in advance of Titania’s 24 years of unarmed struggle, skulking on the patch of ground reserved for the weary, right-of-centre commentariat. Not the red meat brigade of Rod Liddle, Piers Morgan and Katie Hopkins, but the no less exasperated moderates; the kind of person who reads Matthew Parris’ column in The Times and nods along.

Why go for the throat of Woke millennials in character? Well, it’s funnier than being the middle-aged duffer, who in repudiating calls to respect all views on the left, regardless of their relationship with facts, and their pious tendency, evocative of the religious zealots of old, would then be open to attack by hordes of indignant, no platforming snowflakes, whom instead of fighting for a world in which their views are the new political consensus, seek to create it by simply disavowing those they’ve failed to proselytise.

Titania’s genius, as I’m sure she’d agree, is that she can simply deflect criticism of her monolithic positions on gender, sexuality, race, religion, Brexit and freedom of speech, by aping the zero tolerance, thought terminating rhetoric of her real world “heroes” – poor sods like Alexandria Ocasio-Cortez, whom she quotes asserting “there’s a lot of people more concerned about being precisely, factually and semantically correct than about being morally right.”

And broadly, damning each source with the faint praise of unquestioned adulation and close identification (naturally with the odd inadvertent passive aggressive barb tacked on), Ocasio-Cortez’s brain fart is McGrath’s thesis in a sentence.

Her feelings, as she makes clear, don’t care about your facts, and consequently an adult man with a veiny pendulous cock (like my own, natch) can be a woman if he so chooses (after all no one’s ever seen a chromosome). Shakespeare’s a racist, guilty of an early example of cultural appropriation or “crackerblacking”, radical Islam should be free to rebrand as a religion of peace, and men who are attracted to women and show it are perverts. In fact, conventional sex being an act of violence, Titania prefers politically benign and emancipating intercourse with plants. “There’s nothing more sublime,” she tells us, “than the sight of a Marxist cultural critic shoving chrysanthemums into her twat.”

Woke’s a caustic walkthrough the obtuse and intolerant world of mass tolerance. Beneath the bon mots and brutal rugpulls, there’s real anger aimed at those who’ve corrupted the discourse to the extent that misandry has become normalised, women must accept the imposition of what constitutes a woman from a well-meaning but self-involved minority, no platforming is an honourable alternative to debate, identity alone is a determinate of privilege (socio-economic factors being notes in the margin) and, most terrifyingly, thought crime is now a recognised offence.

Laurie Penny’s quoted assertion that someone who holds a racist thought in their head should not be permitted to articulate it, even in the privacy of their own home, shows how insecure and frightened McGrath’s real world brethren have become. You’ll read more serious political tracts this year with less slam poetry and a more nuanced exploration of the issues (including the terrifying prospect that the Woke intelligentsia aren’t wrong about everything), but none will leave you as triggered.

Titania’s guide to social justice is, in reality, a call to the internet’s most self-assured and indignant to wake up before they slide into a homogenised hell where difference of opinion and lived experience has been extinguished at the expense of curiosity and mutual understanding. What hope they’ll hear it?