Film Review: Can You Ever Forgive Me? 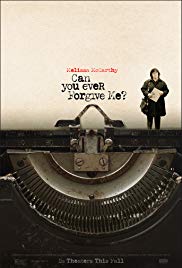 Can you ever forgive me? A question that if asked by Melissa McCarthy is likely to result in an unequivocal no. After all, Melissa has inflicted nomedy and toe-curling improvisation on us for some years now, in an era when movie comedy is the laziest and least ambitious it’s ever been. But there was a time when drama and mirth didn’t exist in different universes, and were even thought to be two balls in the same sack, and thankfully, Marielle Heller’s adaptation of Lee Israel’s forger’s memoir, evokes that era, not the witless crud we usually associate with its star.

Israel was a lonely and tragic biographer, who, like all writers, flirted with penury and complete indifference to their unique and personal contribution to culture. If that’s a meta joke at McCarthy’s expense, from the critical intelligentsia who find her work about as appealing as a bed sheltering dead flies and cat faeces, it’s also great casting. McCarthy, given a role with integrity about a woman with none, humanises the shat upon writer, who resorted to forging letters from the likes of Dorothy Parker and Noël Coward to stay afloat.

The film’s thankfully indifferent to the morality of the scam, instead focusing on the personality and crippling loneliness of its antagonist. There’s no Hollywood solace for Israel, certainly not in the company of bookstore owner Dolly Wells, who in a romantic comedy would be the readymade love interest for the gay writer, but here is both an unwitting gull and potential way out that the awkward and guarded scribe can’t take. There’s also little comfort from friend and accomplice Jack Hock (Richard E, Grant reviving his Withnail to lesser effect), whose selfishness and vulnerability chimes with the author, but ultimately contributes to her downfall.

Can you Ever Forgive Me is a story about fakes that finds sympathy with the unfortunates on trial, while gently deriding the custodians of high culture – the agents and dealers, who are rendered capricious and self-interested, as they surely are. That doesn’t leave a lot of room to reflect on the relative value of literature or the commodification of reputation, but it’s an honest and wry account that might even give the unsung author at its heart some belated recognition for a dismissed talent. Hell, make a few more like this, Melissa, and you might be forgiven…though don’t hold me to that, obviously.

Certificate: 15 for cat shit, bullshit, and - in the case of Richard E. Grant, the same old shit.