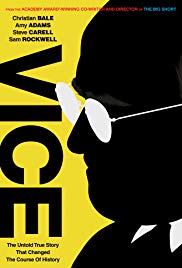 Why hasn’t Dick Cheney sued writer/director Adam McKay and producers Brad Pitt and Will Ferrell, amongst others – the makers of Vice? The film pins nearly a million deaths on the Machiavellian former Vice-President and terrible shot, who’s portrayed as a nihilistic sociopath, who ditches the booze at his wife’s behest, only to become addicted to power instead; power that’s ultimate used in service to his business interests in the arms industry and the furthering of elite consolidating neoliberal economics.

Perhaps the reason that Cheney won’t be calling his lawyers is the film’s opening disclaimer that it’s as true as it can be given the information available, which it later concedes, with frequent time jumps back and forth, disguising the lack of biographical content, amounts to broad strokes. Add to that a comic undercurrent, that saps the film of dramatic heft, even in its most serious moments – a tone that energised McKay’s Big Short when the subject matter was dry and characters unknown, but here acts like a perpetual raised eyebrow, and you have a biopic ripe with innuendo and scurrilous incident that asks its audience to join the dots and draw up its own indictment.

The sense that Vice is neither one thing or another doesn’t diminish its entertainment value – there’s fine, semi-serious performances from Christian Bale as Cheney and Steve Carrell as Donald Rumsfeld. Are they playing it straight? The twinkle in their eye and a tendency toward comic exaggeration (or in Bale’s case, understatement), suggests not quite. If McKay’s point was to emphasise the inherent absurdity in these characters acquiring and executing such unprecedented power, then it’s well taken – but the risk of casting likable comic actors in serious roles, then adding a loose, freewheeling quality to the material, is that the liberal case against the men in question is undermined.

Nevertheless, for those unfamiliar with Cheney’s role in the Bush-Cheney White House and back room running of the administration, Vice should prove a popular primer with enough easy, middlebrow appeal to educate an audience who’d otherwise be indifferent. There’s also a self-reflexive joke about the inevitable accusation of bias that will be levelled at the movie from the very right wing media it suggests found voice on Cheney’s watch. But the film’s built-in defence – that facts cannot be disputed; a necessary qualifier in the age of so-called Fake News; flags it weakness. It doesn’t quite have enough of them to resoundingly kill off its target, leaving a sense of frustration – of a job half done.

Certificate: 15 for Sam Rockwell eating with his fingers, betraying your gay daughter, and a focus group member being psyched for the next Fast and the Furious movie.