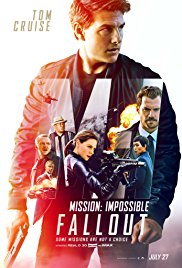 Do you remember the excitement when Sam Mendes took over the Bond series? No, me neither. But amongst some pliable critics, anticipation built around the idea of a prestige action movie. The theatre and occasional film director would imbue the material with greater heft, they said – we’d have artistry, psychological depth. But Skyfall and Spectre, though beautiful, were a couple of air heads. Mendes couldn’t direct action for toffee, and the exploration of Bond’s interior life, coupled with the fanciful and nonsensical plots, produced two dissonant, moribund blockbusters. Why mention them here? Because Christopher McQuarrie’s second crack at the Mission: Impossible series fulfils the promise of those boring Bonds. It’s a moody thriller with a sinister undercurrent, that deftly balances barnstorming practical stunts with espionage shenanigans, wry humour, and, stop the clocks, a little look under the hood of series’ chief cock, Ethan Hunt.

Previous entries have been content for Hunt to be a Bond substitute, though notably without the charisma, who makes up for that shortcoming thanks to Tom Cruise’s single point of differentiation – a willingness to risk life and limb on camera with acts of physical dexterity that put his rivals to shame. Knowing he’s prepared to jump at altitude, ride a bike the wrong way around the Arc de Triomphe into oncoming traffic, and pilot a helicopter around a mountainous region at speed, adds tension and real jeopardy to a genre that’s been anesthetised by computer generated trickery.

Cruise, channelling Buster Keaton and Harold Lloyd, has reinvigorated the action movie this way, and it helps that McQuarrie stages each set piece meticulously, cutting the action so we can drink it all in. But all concerned will have known that the greatest risk Cruise could take was trying to turn Ethan Hunt into a three dimensional human being. Everyone associated with this series will remember the near death experience of Mission: Impossible 3, when Hunt’s relationship with Julia (Michelle Monaghan), pushed front and centre, stripped the character of his mystique and killed the movie stone dead.

Fallout re-runs the Julia in jeopardy sub-plot, but here it’s handled with greater nous – a third act reintroduction for the character that heightens the stakes without detracting from the mission. McQuarrie, to his credit, has found a way to tie-off this wretched story arc, while using Hunt’s guilt around her imperilment to make a broader point about the character’s genuine concern for the innocent individual. Fallout’s structuring theme is that the difference between Hunt and his enemies is that he doesn’t see people as abstractions or assets; his life being a constant and high octane struggle against those who do, and plot to kill us accordingly. This is a little shading that gives this sixth movie in the series a greater emotional core than its predecessors.

McQuarrie understands that we don’t come to a Mission: Impossible movie to brood and philosophise, however, so, unlike Sam Mendes and his artfully photographed but lethargic Bond movies, he’s structured his film as one long chase, a desperate bid to retrieve a couple of nuclear bombs that never relents, dynamically moving from one setpiece to the next without the lulls that have occasionally bedevilled previous instalments. It’s such a smooth and efficient machine, that there’s not much room for personality or indeed, humanity, on the ride, but it’s a better Bond movie than Eon have managed to produce for 12 years, and although a direct sequel to Rogue Nation, it has its own look and feel, justifying the decision to keep McQuarrie rather than change directors, as is traditional for this series. Brian De Palma’s 1996 opener may still have the bragging rights when it comes to audacious zaniness, but Fallout is the most coherent and satisfying thriller of the six movies.

Does Cruise have another Mission in him? On this evidence, yes, but given the imperative he and his collaborators will surely have to continue upping the ante, he’d be unwise, at 56, to wait too long. In the meantime, Danny Boyle, Daniel Craig – it’s your move.

Certificate: 12A for Simon Pegg surviving another Mission: Impossible movie, Jeremy Renner's absence not being explained, and Sean Harris's beard.