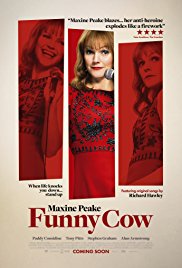 An Erection in Bielefeld

The seminal 1975 Trevor Griffiths’ play, Comedians, took a scalpel to the contemporary world of stand up comedy and the then rite of passage transition from working man’s club to television stardom. The questions Griffiths asked were and are pertinent – if there’s an art to comedy, what informs it? Should a comedian dare to fashion their own philosophy and challenge their audience, or pander to their outlook, and if so does that make them a comic or a reactionary pub bore with a platform? If the object of becoming a comedian is to leave behind an unfulfilled life of sterile conformity and adversity, liberating one’s self from drudgery and attaining the attention craved by a damaged soul, then does any of the aforementioned stuff matter?

Now another northern writer, Tony Pitts, has revisited these questions, albeit indirectly, in Funny Cow, a drama about an aspirant ‘70’s comic who uses humour both as an emotional crutch to cope with her intensely bleak existence, memories of poverty that verge on parody, recalling Monty Python’s  Four Yorkshiremen sketch, and a potential route out of destitution, domestic violence and disappointment.

Adrian Shergold’s film; which plays like the biopic of a real comic, eschewing any exploration of craft in favour of vignettes from a troubled life; alternates between unflinching kitchen sink drama and whimsy, sometimes in the same scene. Witness the child version of Maxine Peake’s character, Funny Calf, savagely beaten by her father, only for the implicitly precocious child to spring up and undercut the aggression with a sardonic “are you angry, Daddy? You seem angry.” It’s like watching a stabbing scored to music from Last of the Summer Wine.

Consequently, the story is presented in a couple of registers that aren’t strictly compatible. The melancholic playfulness seems to promise an aspirant narrative with a liberating payoff, but the Funny Cow of the early ‘80s, successful enough to warrant her own long stare TV confessional, appears as miserable, lonely and embittered as her younger self. Her journey has been a circle in which she’s passed familiar points, like disappointed men who beat her, and an inability to form strong emotional bonds, namely with her mother and a middle class, book shop owning boyfriend, that egregiously makes her welcome in his life (only to be remembered as affected and self-absorbed), to end up a slightly older Crusty the Clown, complete with sad eyes and cigarette.

More convincing is the social realism – the sense that Funny Cow’s life, framed as it is by gruelling archetypes and working class clichés, is inevitably unfulfilling and unsalvageable. In the end, she’s achieved sufficient fame to buy a nice house on the coast and expensive car, but has no one to share them with. And worse, from the audience point of view, we’ve seen nothing to convince us that she’s earned even that materialistic vindication. Her act is indistinguishable from the cookie-cutter comics of Griffiths’ play, who put rocket boosters under their career by giving the boorish crowd more of what they think comedy is – humour that hates it targets and flatters the ignorance of its audience.

“I’ll win them over with love,” the Cow tells Kevin Eldon’s impresario, only to go out and tell the kind of easy, racist jokes that raised a smile when she heard them told by an older, burnt out comic (who symbolically hangs himself when, redundant, she takes his slot). Pitts’ script, unapologetically, flouting its credentials as a period piece, shows us Cow’s comedy is unreconstructed and old hat. This is bravery on the part of all concerned, because it asks us to invest in a performer who Griffiths’ forensic eye has taught us to be artistically worthless. As she’s a perpetuator of low brow crud, rather than a Gethin Price, kicking against the grain, using her insight to fuel a more self-expressive form of comedy, it’s hard to feel anything but pity for the titular performer.

Had Griffiths’ play never existed, we might have patted the filmmakers on the back for nobly refusing to judge Funny Cow by modern tastes, or retrospectively deconstructing her act. But as Comedians managed the feat so brutally back in 1975, managing to make both the traditional and proto-alternative acts sympathetic and hopeful, this 2018 foray into the same world seems simple by comparison – a story where nothing is learned or gained.

Certificate: 15 for Vic Reeves, people who think jumping out from behind the sofa is funny, and not one good joke.