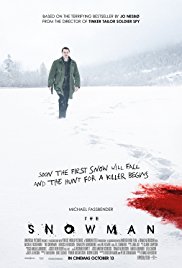 There are cinematic oddities and there’s The Snowman, an adaptation of Norwegian scribbler Jo Nesbø’s airport lounge thriller, which we can infer from the finished product was a very troubled production indeed. You’re alert to the potential for a lost in translation celluloid calamity upon learning these are the serial killer hunting adventures of a man called Harry Hole (son of Plot) and that in the chosen adaptation he’ll be on the trail of a man who builds snowmen outside his chosen victim’s homes as a harbinger of their impending doom. All of which sounds very silly, but perhaps, you think, these are taunt, Thomas Harris inspired, meticulously plotting noirs brimming with tortured ids, Scandinavian atmosphere and psychological density – the cinematic version of which will be a tour de force.

Pre-screening confidence is raised yet further on learning that the adaptation will be directed by Tomas Alfredson and produced by no less a movie alchemist than Martin Scorsese. Alfredson, lest we forget, recently helmed an excellent version of John le Carré’s Tinker, Tailor, Soldier, Spy. The Snowman is edited by Thelma Schoonmaker – Scorsese’s Oscar winning collaborator. The lead is a grizzled, brooding Michael Fassbender. Fuck me, you say, this is going to be something special.

But right from the off The Snowman, for all its Norwegian beauty and icy compositions, plays like a movie that’s been kicked in the head…if it had a head. An oddball prologue, in which the aging serial rapist of a single mother threatens her with excommunication if she tells his family (er, good?), is just the start of a thriller shot in the wrong dramatic register. The performances, with the exception of Fassbender, who wisely choses to embody intense neutrality, are uniformly ill-calibrated – either over or underplayed. This produces a strange theatrical sense of unreality that saps the disjointed plot of tension and undermines its dramatic credentials. The worst of these is a bizarre, perhaps exploitative cameo from Val Kilmer – puffed up and drawn by real life surgery to remove a tumour, and apparently no longer capable of audible articulation. He’s dubbed here with all the precision of a Star Wars Stormtrooper, in some of the worst work seen since the days of bootlegged Hong Kong action movies.

It’s almost impossible to reverse engineer the decisions that led to the inclusion of these scenes, but the misaligned, mangled dialogue does at least provide the opportunity for a segue into the issue of the lack of dubbing required elsewhere. The Snowman may be set in Norway you see, but for no discernable reason this is a curious movie version of the country where everyone speaks English and everything’s written down in English. No close up on Harry Hole’s hole here, and the seamless shift from Norwegian to English – the only way to flag the characters are speaking in one tongue but you’ll be hearing another, as John McTiernan showed us in The Hunt for Red October – just an inauthentic Norway, stocked by UK actors, that only adds layers to the film’s caked on weirdness.

The story has a choppy, mismatched quality, with whole scenes from the trailer missing entirely; omissions that suggest reshoots following poor test screenings (where’s the burning house Fassbender collapsed in front of during the preview?). There are entire subplots here – Hole’s relationship with his adopted son, sleaze behind the scenes of an Oslo bid for the Winter Olympics – that fizzle out, which would be less egregious if the A-Story, the hunt for the titular deviant, a man with a grudge against single mothers who likes to cut them up into a Snowman’s constituent parts, had urgency and oodles of Silence of the Lambs-like dread. Unfortunately, the pursuit is less a feat of stellar detective work and the careful cracking of suspects, rather the bunching of a few thin plot threads and the good fortune of an improbable personal connection to the killer. It could be there’s a coherent, gut-churning version of the Snowman sitting on Thelma Schoonmaker’s Mac but apparently someone changed her password.

Ultimately, Alfredson’s film is a truncated cold mess – muddled in its plotting and compromised by an all-at-sea cast, few of whom seem able to get a grip on the material. Fassbender manages to exude a suitably pained and conflicted exterior as the detective who asks very few questions but still manages to put the whole thing together (perhaps he’s just that good), and it would have great to see him return for a series of these movies, but given the cut and shut quality of this one, that seems as remote a possibility as a cheap drink in Bergen.