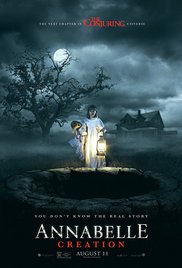 Warning: This reviews discusses the plot, such as it is.

It’s hard to muster the enthusiasm to write about boilerplate horror, Annabelle: Creation, as this prequel to a prequel to The Conjuring is so derivative of the decade’s seemingly unkillable haunted house horrors, that there’s little left to say. David F. Sanberg, director of Lights Out, a slight but moderately effective chiller that borrowed much from James Wan and his well-used box of tricks, here attempts a link up with Wan’s Conjuring series. Fans of those movies and their adjectival brethren, Insidious, Sinister and the like, know exactly what to expect and they get it here in spades, though sadly at the expense of internal logic and strong character work.

By now just about every trope employed by these movies can be recited by heart – the improbably large old house with plenty of nooks, sinister staircases, secret rooms, creakable fixtures and fittings, a malevolent presence, besieged children, religious iconography, creepy pastel etched child notes, creepy child drawings, an upbeat musical standard – in this case “You are my sunshine”, given an uncanny aspect, characters with limited mobility (so house bound), close ups on dark corners, slamming doors, and an expert in demonology. Well, this movie leaves out the latter, retaining the rest, but only because it has no interest in solving its evil spirit problem. This is a prequel after all.

But what of the plot, you ask? Well, away from the carefully calibrated domestic disturbances there’s nothing new under the bed. Anthony LaPaglia plays a creepy version of Geppetto; a toymaker in the ‘50s dust belt, whose work plays well with the locals, despite the look of his nightmare inducing creations. In an extended prologue, his daughter, the titular Annabelle, is killed when the family, including mother Miranda Otto, gather by a roadside to change a loose tyre.

From there we cut to twelve years hence and the bereaved couples’ mystifying decision to invite a group of wayward orphans, nun in tow, to become live in lodgers. Why mystifying? Because, the psychological improbability aside (why would a couple want to surround themselves with children when they’ve lost one in tragic circumstances?), we later learn LaPaglia and wife struck a Faustian deal with a demon who pretended to resurrect their daughter in exchange for, er, safe harbour in a Geppetto original.

The couple lock up the doll and the evil spirit therein when it gets cocky and reveals its true identity, banking on a few wall pasted pages from the Bible for long term protection. Why risk bringing young vessels, sorry kids, into the house then, you say? Don’t children naturally explore and disobey orders not to enter certain rooms? Why risk the peace? “Penance” is screenwriter Gary Dauberman’s one-line explanation, and if you’ll believe that perhaps you’ll also accept the reluctance of the couple to warn their wards when its apparent their house demon is back on the prowl.

So Annabelle: Creation asks for your absolute (unearned) trust and reluctance to look past its tired shock tactics. Perhaps there’s something bold in the decision to sacrifice the lead character, Polio survivor Janis, in service to pre-established continuity, but it makes for a downbeat, rather than tragic conclusion to a movie that could and should have played up the relationship between its two adolescent stars (a very good Tabitha Bateman and Lulu Wilson). Their friendship initially promises to be the movie’s black heart but there’s little room for any character development in a film assembled from the off cuts of others – the story just a clothesline on which to hang the bangs, slams and creaks.