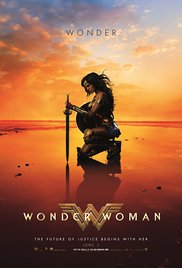 A Good Woman Goes to War

Long before DC were reviled as Johnny-Come-Latelys who made inferior, joyless copies of Marvel’s movie output – the “Their Satanic Majesties Request” to the MCU’s “Sgt. Pepper” if you will, they were the only game in town. The likes of Thor and the Hulk were stars of cheesy made-for-TV movies when, under licence, Warner Bros. were making blockbuster origin stories like Richard Donner’s 1978 Superman: The Movie and 1989’s Batman. Patty Jenkins’ Wonder Woman isn’t in that class, but in (Tony) stark contrast to the frivolous, light-hearted tone of Marvel’s juggernaut, it’s a reminder that DC’s output, when handled with care, can still deliver something more satisfying than cartoon heroics.

The movie lacks a practical aesthetic, it looks like what it is – a film built in a computer, and the pacing is uneven – it’s slow in places, but it makes up for these deficiencies in character development and social comment. Jenkins has taken her storytelling cue from Donner’s genre classic, giving the title character an earnestness and moral certainty that’s blissfully free of existential angst or nihilism. Diana, Amazonian princess, fights for peace, compassion, truth and reason – a manifesto that Christopher Reeve’s Superman could get behind. Prince might share Clark Kent’s chief character flaw – namely, she’s less a person than a walking set of principles, hence she’s partnered here with Chris Pine’s charismatic spy, but Wonder Woman’s relative innocence and absolute conviction make for an endearing and formidable hero.

The filmmakers might have left it at that, allowing a simple good versus evil battle to play out against an easily caricatured enemy, namely the Great War’s German Army, but Jenkins’ movie has a more interesting tale to tell. Rather than cheapen the historic backdrop by allowing the conflict to be the machinations of Prince’s divine enemy, Ares – God of War, the movie opts to flex its allegorical muscles and instead become a morality play about the collective responsibility we share for human failure.

In a broadside aimed at complacent, virtue signalling Trump-watchers, Pine – the film’s pragmatic voice, reminds us that the road to self-destruction cannot be paved by any one man. The choice of World War One is shrewd, because unlike the clean cut, good fight against Hitler, trench warfare speaks to a collective madness – a war of escalation, sparked by very little, for very little.

The choice of setting also allows Jenkins to express the movie’s progressive credentials using the unreconstructed past as a focaliser. It was inevitable that the discourse around Wonder Woman would centre on feminism and gender representation. Having been introduced to a woman-only warrior culture, protected from the rampant misogyny of the outside world, in which men are surplus to requirements; a society made to moderate and tame juvenile and aggressive man’s worst instincts; the story then employs the time honoured device of a fish-out-of-water to cleanly cut down all socially constructed points of gender differentiation.

As Prince has never entertained the idea that women are inferior, should defer to male authority, suppress their opinions, dress modestly or stay at home while the men fight, she quickly debunks each, oblivious to her iconic status. Does the movie rid itself of all patriarchal baggage? Not entirely. Wonder Woman’s strength is sexualized in some scenes, and Jenkins can’t resist a burgeoning romance between Gadot and Pine – a woman still being that which is won over and acquired as the story progresses. Yet crucially the eponymous warrior is beholden to no one and never upstaged by her male co-stars. Nor is her impetus male. Rather than Wonder Woman taking a find and replace approach to a script written for a male hero, the title character’s perspective is unapologetically feminine. Celebrating love as a fundamental principle may feel mawkish to some, but why have a Wonder Woman if she confuses equality with adopting traditional masculine preoccupations?

The film’s gender politics aside, Wonder Woman is a thoughtful and well-judged superhero flick, that’s shortcomings are fashionable – that it is to say, familiar to fans of the current crop of comic book movies, rather than conceptual – an overreliance on pre-visualised CG setpieces, and risk aversion when it comes to scoring and composition. It’s a pity that Jenkins didn’t go completely old school, insisting on more distinct orchestration and practical effects to give the film additional weight and character. Still, the movie as made is fun, often exciting, and far better structured than its DCEU predecessors. If future entries can better marry style and substance, they could yet be a distinct and cerebral alternative to Marvel’s bland entertainments.

Certificate: 12A for conspicuous CGI, a long boat trip with limited supplies, and wearing a sword to a banquet.