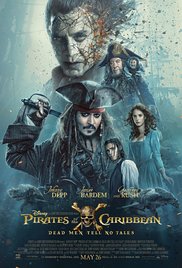 The latest in this long sinking franchise (inexplicably retitled “Salazar’s Revenge” in the UK) features a heartbreaking cameo from Paul McCartney and an indifferent one from Johnny Depp. The former can be added to a case file suggesting Mark Chapman chose the wrong man – evidence that includes (but is not limited to) Ebony and Ivory, The Frog Chorus and 1997 album Flaming Pie. The latter speaks to an accord between a mercenary studio and star. Depp barely performs in this fifth outing, which given the original turn (Oscar nominated lest we forget) was all shtick, is quite extraordinary.

It’s almost as if the profligate, over-indulged, wife beating headliner read the script and realised that if the credited brain trust responsible couldn’t be bothered to produce anything more than a mechanically plotted, one-dimensional daisy chain of exposition and setpiece, he need not rouse himself. In stark contrast with his comedy hero, Peter Sellers, whose work ethic when it came to his own reluctant guaranteed pay day, the Pink Panther series, could not be denied and is immortalised on screen for all to admire, Depp floats in the background of scenes, occasionally breaking cover to look confused or repeat a half-hearted quip relayed to him from an embarrassed crew member, through his earpiece.

It’s hard to remember a movie where the marquee name did less, cared less, and this indifference to the material is highly contagious. Depp’s lethargic, already spending the money in his head. We get to feel the same, except we’re a few quid down on the deal. It seems unfair and it is.

What’s Dead Men Tell No Tales about? Finding the Trident of Poseidon, reuniting families? Writer Jeff Nathanson would no doubt argue the latter, keen that we should be fooled into believing this confected piece of industrial product has an emotional core. But Hollywood scribes use families, dysfunctional and otherwise, as a cheap trick to signpost a corporate fart’s human credentials, and it’s never been cheaper than here.

One senses that Nathanson took some inspiration from late franchise mainstays like Indiana Jones and the Last Crusade – there’s lore diaries here, fathers and sons, a flashback to the hero’s origin – but whereas Steven Spielberg made his maguffins foreboding, intriguing, thereby investing the audience in the quest, the trident’s just a thing oft mentioned but never suitably mythologised.

Spielberg made a movie with characters you cared about, whose company you enjoyed. What imperilled them was of some concern to ticketbuyers – effective pacing and setpiece construction generated anticipation, tension – the jokes were wry. Espen Sandberg and Joachim Rønning’s film (two directors!) plays like an assembly edit. One thing happens after another without consequence or interest. And the humour is curiously, depressingly, misogynistic. Women need not give Depp their hard earned money, it’s clear he and the filmmakers despise you.

Depp recently made headlines when it transpired he vetoed a female villain for the film citing one of his recent flops, Dark Shadows, that featured a bevaginated antagonist. But watching Dead Men Tell No Tales one’s left wondering whether the real reason was Johnny’s discomfort at the equivalence the audience would draw. The film has a running joke about Kaya Scodelario’s heroine being a whore (a gag that in her place, I might have insisted was taken out), and the only other showing for the ladies is a disgusting scene in which Depp’s pirate gets a cheap laugh from parading a shrew on screen and pontificating on her appearance at agonising length (and that of her daughter) – and this in a movie featuring Geoffrey Rush. Keira Knightley reprises her role at film’s end, but isn’t permitted so much as a line of dialogue. And to cap it all, the cursed part of the sea, that condemns men to a miserable haunted afterlife once entered, is a cave named the Devil’s triangle. As Austin Powers once said, “paging Doctor Freud”.

A post-credits stinger threatens another sequel but all concerned, particularly Johnny Depp, should think hard about whether the audience deserves another listless adventure. Depp may have a lifestyle to bankroll, but if I were him I’d learn to exercise some self-control rather than return to this particular well. Once overflowing with goodwill, it’s now lined with the thick black distillate of audience boredom.

Certificate: 12A for Orlando Bloom, effects instead of characters, and lady hate.