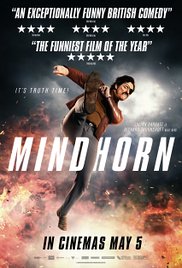 Warning: This review contains very little comment on the film itself.

I’m afraid I don’t have a great deal to say about Mindhorn, a comedy of sorts, because when I search my memory for the impress of its jokes, the delineated edge of its plot line, I find them absent. Why? Because I sat through the film seething, heat radiating from my head and chest. This had nothing to do with Steve Coogan, rather minutes before it began a macho ramburgular, whose suite of affectations included a side-parting, ironed undershirt, smart shoes and a propensity to cross his legs while reclining on a seat stained with Pepsi and cum, decided to censure me for the unpardonable crime of talking about movies while waiting for this one to start.

Consequently, it’s impossible to talk about Julian Barratt’s extended TV special given a cinema release, without discussing this wet ball of junk masculinity, twatishness and stupidity, who ruined my screening in a bid to show off to his bespectacled belle – a woman for whom each and every reader should fart pity in the hope the cloud of charitable concern rises to the lower atmosphere, drifts to her location and rains down on her head; in all likelihood the first time she’ll have been wet in years.

Yes, you see we can all show off and be self-righteous. It’s rather easy, isn’t it? With that in mind, on we go.

Mindhorn’s a character who can literally see the truth, so it’s fitting that while the film’s minor story complications played out in the register of TV sketch comedy, largely in my subconscious, I focused on the truth of my situation – that I wanted to stove in the skull of the half-wit in front of me. In fact, for nigh on an hour and half I imagined the joy of feeling the crust beneath his parting give way and the thrill from the plunge into redundant brain tissue – dead cells that had been insulating a misfiring stem for too many inconsequential years.

His initial show of force had been a few theatrical turns to the rear, breaking eye contact before he committed to a physical brawl his body language suggested he didn’t fancy. I’ve done this myself of course, with the film in question actually playing (arguably the time to get riled). He hoped to appear intimidating, the same foolish trick pulled by all middle class software engineers channeling Jason Statham, while getting a glance at the opposition.

If wounded pride on the back of a retaliatory “fuck off” compelled this bastard from a basket to attack, what were his chances? Well, he looked at cuddly, bespectacled me – the kind of man who’d text boo to a goose, and concluded his odds were pretty good. Yes, he could play the aggrieved tosser with confidence, knowing the likelihood of being stabbed in the eye with a red marker pen and ending up like Mindhorn was less than five percent (Fact check: it was closer to seventy-five).

He opened with, “can you keep it down,” – no please there, but straw hardmen can’t risk manners, it shows weakness, it’s feminine. What would his girlfriend think if he softened his voice and kept things cordial? Perhaps she’d wonder if this wasn’t the guy to captalise on her ovulating; that half-mast hadn’t been his college nickname because of a stoop. No, he had to show strength, smash me back on my heels before I knew what was happening. Only then could he feel powerful and enjoy a proxy victory over those awful playground bullies; defectives who’d ironically endorse the practice of getting off on preying on the chemically balanced.

“If you want a chat, go outside,” said this rectal parasite, a weeping pustule on Jimmy Savile’s putrefying dick; a line rehearsed in many fantasy confrontations, balls out in front of the mirror; apparently unaware that talking about MOVIES before the film starts is normal. One might even say it shows interest. It’s not an affront to even the most supercilious gadfly.

It’s chat DURING the film that’s obnoxious, inconsiderate and counterproductive. I often talk about movies before movies. Why, 3 hours before Mindhorn I was discussing Alien: Covenant. 18 hours earlier I mentioned the cinema to my brother in a phone conversation. 6 months before my intellectually wanting walking spoiler lost self-control and self-respect, I was sitting in a pub chewing on celluloid, and 21 years prior I was on a beach in Plymouth, openly pondering whether to see The Craft before dinner.

Of course, thanks to the correction received from the self-appointed prefect of Row C; C apparently standing for cunt; I bitterly regret those incidents now. Screen 1 of the Cineworld West India Quay, the last outpost of 19th century decorum, belonged to him, consent be damned, and contrary to common sense or fact, he had every right to police it, to bend it to his will, so he might better hear a trailer freely available on the internet.

Of course, this human waste product; this conceited, ignorant, vain non-entity, who’d die unloved and was secretly despised by the last of his childhood friends, will have worried that the film conversation behind him would continue when Julian Barratt’s opus began. He couldn’t know that he was sat in front of a cinema Nazi, who hated all forms of distraction DURING the film, including the maddening shuffling and whispering to girlfriend the flaccid coprophile indulged in throughout a demanding 89-minute running time. But what normal people did, i.e. waiting until the film began to see if the lapse in etiquette was real or simply a product of their imagination (like their importance), was no business of his. You don’t go to the cinema to face reality.

His feminoid, his cowardly enabler, faced forward while he made a pompous fool of himself, nursing private doubts about her preening phalloid’s personality that would, in years to come, accrue and deepen, leading to the inevitable conclusion that she’d made a terrible mistake (while hypocritically remaining silent while the gorilla beat his chest on so many awful, embarrassing occasions). Her shame total, she would go on to spend the film gently placating his ego with hands held and a head to the shoulder, while reflecting that his forthcoming trip to Japan would be the perfect time to make the break and her friends could probably have all her stuff out of their flat in 72 hours.

So Mindhorn was barely a movie. Not strong or witty enough to cut through anger born of injustice. Not original enough to penetrate the odious machinations of a narcissistic donkey with permanent and fatal character flaws. Still, always good to see Tamara Drewe’s Jessica Barden working.

Were you the imbecile in seat C14? Well, here’s hoping you get ball cancer. See you at the movies.

Certificate: 15 for mocking the golden age of television, not having enough material to go beyond 85 minutes, and the stroke merchant of Row C.