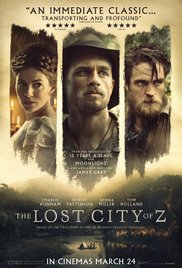 One can understand why James Gray salivated at the prospect of adapting David Grann’s biography of Percival Fawcett; an early 20th century British army officer and explorer, whose obsession with finding a lost city in the Amazon led to…well, who knows? He became as lost as his quarry; his fate unknown (though we can take an educated guess). It’s a classic boy’s own adventure, replete with tricky natives, jungle nasties and good old fashioned British reserve. But the treatment here, though assured enough, lacks dramatic heft.

If the sense of wonder and danger that Fawcett discovered on his trips to South America doesn’t cut through, his passion and compulsion does. Charlie Hunnam’s performance successfully paints the picture of a man consumed, whose determination to restore his disgraced family name and gain some of the recognition imagined to be his due as a member of the officer class, trumps all other considerations – particularly his frustrated wife, left to bring up the children alone, her hopes of a more egalitarian relationship withering on the vine.

As her dreams of a future in a loving partnership underpinned by recognition of her womanly rights and equal status dies, so too does our hope that the movie will counterbalance its character study of Fawcett with something approaching scale and adventure. Hunnam’s explorer has barely made advances when circumstance requires he returns to England, not once but twice if you please, even getting a period of Great War service in, before finally returning for his ill-fated last expedition.

With nothing much happening on the exploration scene, The Lost City of Z asks us to invest instead in Fawcett’s role as a great debunker of Edwardian bigotry toward the native “savages” of the Americas, and the threat he represented to imperial orthodoxies of racial superiority; the myth of the British as the fathers of modern civilisation. In an aside that doubles as contemporary eco-commentary, Fawcett notes how the Amazonian tribes, though wedded to unfortunate traditions like cannibalism, have cultivated the land and found a sustainable balance between community and nature.

The movie never quite makes the case that Fawcett found an enlightened people, in the vein of Dances with Wolves, as in all likelihood he and his oldest son (tagging along to associate himself with the object of Daddy’s affections) were ultimately murdered by some faction, but we’re never in any doubt that he embodied the great exploratory zeal and bravery of the period – the era of Scott and Shackleton. Lost City of Z is an evocative and well-made period piece, then, albeit one that misses the breadth and depth of the David Lean epics it sometimes recalls but never matches.

Certificate: 12A for R-Patz, a David Lean inspired match cut, and not finding a fucking thing.