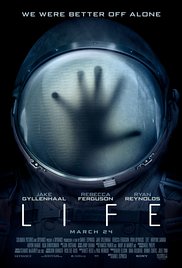 The lazy shorthand for Life would be Alien meets Gravity. Unfortunately, Daniel Espinoza’s film is also lazy, so never transcends that one sentence pitch. That’s exactly what you get, beat for beat, set for set, visual effects sequence for visual effects sequence. The design and plot are so perfectly derivative, spliced from their respective parents, that it’s possible to imagine the film was previsualised from existing footage, with a canny editor just cutting the two together. All Espinoza had to do was trace over the edit. It’s likely he directed it from home with the sources playing on his TV.

But these are solid sources, so Life, despite not having a single original thought in its head, and no ambition to do anything new, can’t help but be a passable creature feature, buoyed by a stirring, if generic score, and some decent computer animation.

Dread and menace, the cornerstones of this sort of thing, are present in audience pleasing amounts – the alien in question resembling the kind of beautiful but gelatinous nasty one might expect to find at the bottom of a deep water trench. Of course as ever, the threat is less important than the humans fighting a rear guard action, and this is where the life starts to drain out of Life.

A screenplay in need of a rewrite is one that has to explain itself to keep the audience on track. Life‘s characters, such as they are, representing the economically significant regions of the world (and key movie markets) explain each other’s motivation, in case it wasn’t clear (often, it isn’t) and presume to know what the alien’s up to, despite the obvious pitfall that no one on board the international space station is an expert in a species they’ve only just discovered.

Granted, one can make scientific guesses, but matter-of-fact comments on the creature’s survival abilities, instincts, and intelligence – pronouncements designed to facilitate plot points – clunk like space debris hitting a command module. These things could surely have been established with greater subtlety – perhaps, heaven forfend, through the creature’s actions, but that would have meant additional work no one was apparently inclined to do.

Which is a problem because Espinoza, determined to pull off a third act switch-a-roo, asks us to believe that this canny starfish (Starfish being the obvious alternate title), had the nous and understanding of space flight technology to change an escape pod’s trajectory to revert back to re-entering Earth’s atmosphere.

A smarter movie, cut more effectively, might have introduced ambiguity around the question of whether escapee Jake Gyllenhaal, managed to change course. But we note he did, so are left with a flick that asks us to make monster leaps without doing the ground work to make them plausible. We’re left wondering if anyone in space can write a great character centred screenplay anymore as the filmmakers on Earth seem to have given up.

Certificate: 15 for Janet Leighing the only character with any charisma, telling the audience what's going on so we don't have to think, and no new ideas.