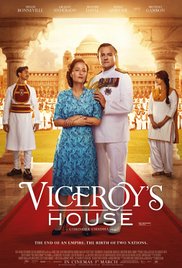 Who better to give a colonial history lesson than the granddaughter of those displaced as part of Britain’s imperial legacy? Well on this evidence, someone more adept at balancing the story of ordinary Indians with the monumental events engulfing them.

Perhaps some stories are just too big to be told in an hour and three quarters. That’s the sense that one gets when watching Viceroy’s House, essentially Downtown Abbey in Delhi amidst the withdrawal of Britain from India, right down to the casting of Hugh Bonneville as Lord Mountbatten – a paragon of English reserve and propriety that the former Lord Grantham slips on like a pair of embossed silk slippers.

Gurinder Chadha’s take on the last days of British rule might have worked better as a six-part Sunday night TV drama. As it is, we don’t have a great deal of time to get to know Manish Dyal’s Jeet – the Hindu help, and Huma Qureshi’s Aalia – the Muslim girl he’d like to marry, but can’t as she’s promised to both another man and the looming spectre of Pakistan. Their doomed union, essentially a metaphor for India’s fate (undermined by an audience friendly, partition repudiating ending in which they’re reunited), is supposed to be the beating heart of the film, but it’s too slight a romance to hold our attention and too crowded out by the events we actually care about, namely the historic earthquake that is the end of Britain’s three century long occupation.

The efforts of Mountbatten to secure Britain’s legacy and India’s future, with darkly comic advice from aides about how the partition of Ireland and Palestine were a proven model for keeping the peace, is the meat of the movie and it’s interesting, if dramatically inert. Chadha’s film layers on the exposition without having the budget or the vision to cut to the carnage on the streets; the counterpoint to all the frightfully diplomatic talk in the Viceroy’s palatial surroundings.

What we get instead is a warning from history about the potential short sightedness of dividing a country to fix short term social and political problems. One imagines this will never be a movie that features highly on Nicola Sturgeon’s favourite film list.

Ultimately, Viceroy’s House is a solid history lesson without any emotional investment. One could argue that this being a BBC film, its treatment of Mountbatten (ironically murdered 30 years later by the IRA in an argument about the partition of another country), is deferent to the Uncle of the heir to the throne, to the point where any suggestion he acted in the interests of Britain and not India’s people are resoundingly dismissed.

We’re told he was a well-intentioned victim of British government duplicity and self-interest; a thoroughly decent chap with an impeccable pedigree, who did his best in impossible conditions. Is there any reason to doubt it? Who can say, but the lack of shading and reluctance to explore the last Viceroy’s political leanings make this a textbook history rather than an interrogative and thoughtful piece of drama.

Certificate: 12A for contemporary news reel footage that shows signs of decades old decay, a sanitised treatment of civil war, and Gillian Anderson.