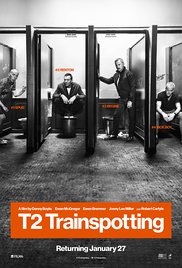 By comment consent, Trainspotting is a perfect film about imperfect people; a youth movie that became a cultural standard on account of its exhilarating, stylised blend of absurd highs, gritty lows, black humour and a transcendent soundtrack.

There’s hardly a ‘90’s whippersnapper who didn’t see it or register some identification with its junkie protagonist, Mark Renton, and his so-called mates. The climax was a kind of hit. To the heart thumping tune of Underworld’s Born Slippy, Mark betrayed his friends and fled with the money from their small-time skag deal, promising, tongue in cheek, to become just like us. It felt good. So why would Danny Boyle risk a come down with a sequel twenty years on? Because Renton’s clean break was a lie. The past is thrown up in mid-life as regret, misplaced nostalgia and disappointment, and a few of us like to revisit it and try to make sense of what happened. That truth is what T2: Trainspotting is all about.

Boyle really only had two choices when making a follow-up after all this time. Either pass over the intervening period and make a dishonest continuation, aping the carefree zeal of the original, or acknowledge the gap and address the audience’s sentimental affection for the first film head on. He opts for the latter, making T2 a more challenging sequel that it might have been. The characters are middle-aged, disillusioned, out of sorts; they’re prisoners of their past, embittered and listless in the present. And that includes Renton, the boy most likely to succeed if his smile to camera at the original’s death was anything to go by.

But Boyle undercuts that ending from the get-go in one of the movie’s many leftfield call backs to the first film. Mark has something like a heart attack on a treadmill (running but standing still – the intervening 20 years in a single image) and collapses. He got away but went nowhere. And that’s the sequel’s strategy for dealing with the original. In a clutch of scenes – a visit to the countryside to remember heroin and HIV victim Tommy capped by cooking up, Spud’s written account of Begbie’s glassing of a woman, with an added coda and sting that gives it a tragic aspect – John Hodge’s script baits the audience with their favourite moments, then censures them for their sentimentality. It’s a trick the film repeats when revisiting that classic soundtrack. Fragments of it play – distended, haunted – like unreliable memories. This isn’t a movie trying to recapture former glories, rather one brave enough to catch up with a bunch of fuck ups and remind the audience that’s exactly who they are.

The first film had greater flow, but then it was recalled from the safety of the present (from Amsterdam we learn), whereas T2, that bar one frivolous and highly enjoyable scene with Renton and Sick Boy back in their mischievous pomp, eschewing Mark’s sardonic narration, is more jarring. Perhaps it needed that spine. It’s as if the disconnect from life felt by the characters extends to the montage. The overall effect is one of discombobulation. Renton’s not anchoring us this time. Did Boyle struggle with this story of pimping and revenge, finding it harder to render than the original’s exploration of addiction? Perhaps he just trusted his storytelling skill more, but the product’s less coherent.

But it’s a pleasure to see these characters again and realise they’re as unfulfilled and broken as the audience that have grown with them in real time. The reunited cast bring a lot of vintage pep to proceedings. Even Boyle, it seems, is occupying old headspace, giving the sequel much of the original’s style and energy. Occasionally it’s conspicuous, as though the director’s trying too hard, but one can be generous and say that in a movie about old frenemies reuniting in extremis, a little channelling of youth is to be expected. Boyle’s like Renton and Sick Boy standing in a club, high on drugs and Radio Ga Ga – for one night only it’s just like old times.

Certificate: 18 for Scots vernacular, applying to the EU to fund a brothel, and being credited twice.