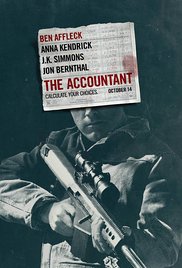 The Accountant’s one of those lavish, big name thrillers (Ben Affleck in this instance) that scores big for daring to be a little different, but is ultimately undermined by being just that little bit too contrived. An overcomplicated plot, with a tax code thick backstory, involves an autistic assassin cum mathematical genius, laundering the mega money he’s made from cooking the mob’s books to support his favourite charity, while attempting to solve a mystery linked to his current employer (who’s naturally hired some mercenaries to protect the secret, despite involving Affleck in the first place), that threatens both his life but also that of legitimate number cruncher, Anna Kendrick. And all this while being traced and investigated by Federal Treasury agents, J.K. Simmons and Cynthia Addai-Robinson.

One can understand why the screenplay provoked excitement in Hollywood – it reads as fiendishly complicated, while also containing the kind of crowd pleasing gunfights and hand-to-hand combat scenes that generate excitement at the box office. But Bill Dubuque’s script has a surfeit of ideas, and not all them work in parallel. It’s a hitman movie, a mob flick, a financial thriller, a family drama, a film about overcoming social stigma – all rolled into one, and creaking at the seams. It just about plays, with most T’s crossed and I’s dotted by the final credits, though with more than just a little credibility sacrificed on the altar of an improbable climax, but the audience is weary from the effort, and longs for something that had less plot, more focus and greater heart.

Dubuque’s ambition is welcome, but much of The Accountant seems to have been plotted backwards to keep the massive show on the road. Gavin O’Connor’s direction is straightforward and serious; a tone that extends to the performances. Anna Kendrick alone appears to have been cast to add levity but the movie takes itself too seriously for such an intervention to really pay off.

A looser approach to the material (as well as the streamlining of the plot) might have paid dividends in the final third, when the limits of a story built in a clockwork universe are laid bare in brutal, uncompromising fashion. The Accountant becomes a movie about two warring brothers, each close to but on different sides of the line separating righteous behaviour from immoral. If the filmmakers had dared to strip the film back to its characters, then this conflict could have been signalled and developed earlier, making for a more emotionally satisfying spectacle. Instead, the film’s cold and matter-of-fact like its antagonist; a movie that doesn’t quite understand its audience.

Certificate: 15 for Ben Affleck's music choices, a competitive Dad, and Hank from Larry Sanders getting nailed to a chair.