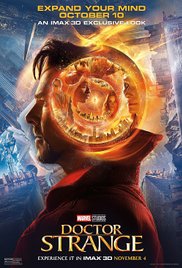 (Or How I Learned to Stop Worrying and Love the Batch)

The fourteenth film in the Marvel series is billed as a mould breaker, a narrative expanding entry that opens up the MCU to stories set in any one of an infinite number of universes, each with their own unique visual signatures and physical laws. Well that’s all very well in theory, but the problem for Scott Derrickson’s Doctor Strange, is that whatever the high concept hook, in this case a hero capable of manipulating the “mystic arts” (or magic, borne of spiritual consciousness to you and me), the movie’s very much limited by the intellectual and spiritual straightjacket that is the parent studio’s business model; a philosophy, if it is a philosophy, that puts creative constraints on the filmmakers, and forces them to think like a machine.

This is particularly galling when introducing a hero like Stephen Strange, for if any Marvel character suggests driving without breaks, then surely it is he. Here’s an origin story about letting go of received wisdom (or rationalism), opening your mind to every possibility, daring to reconceptualise the world by embracing hokum (sorry, other plains of existence). Yet Strange is a movie boxed in by commercial imperatives, frightened to cut loose, lest it confuse, worse lose, the loyal audience the studio’s empire has built.

So a conventional structure, with Cumberbatch’s Sherlock-esque neurosurgeon, forced to turn to alternative healing methods when a car crash causes irreversible nerve damage to his hands – the tools of his trade and enabler of his decadent lifestyle – then trained by Nepalese mystics to use magic, in anticipation of a showdown with the film’s nebulous big bad, is peppered with nifty and idiosyncratic effects sequences modelled on Christopher Nolan’s Inception. Cities fold, churches become kaleidoscopes, time’s reversed, and it’s technically superb, if familiar, six years after Nolan’s film. But what really would have been innovative would be a Marvel story sans decorative love interest (Thor’s Natalie Portman swapped for Rachel McAdams) or a personality free flesh and blood villain (Mads Mikkelsen performing the function once held by Christopher Eccleston et al.). The beats in Doctor Strange are so familiar and the treatment of supporting characters so incidental, that you’re left, as is often the case with Marvel movies, entertained, occasionally amused, but ultimately empty, satisfied you’ve been introduced to a character in the safest way possible.

Perhaps the movie’s only bona fide risks are focusing on a character who goes all-in on being obnoxious, lacking the likability one usually associates with heroes (he’s not quite an anti-hero, as his only vices are arrogance and self-regard), and its embrace of mumbo jumbo; a distinctively old fashioned philosophy. Strange is told that his intellect has taken him far but “will take him no further”, and that appears to be the movie’s message to Marvelheads; that science and technology is fine and dandy, and was something to be celebrated back when the franchise was built on Iron Man, but is now suspect and limiting. In the brave new world of Doctor Strange, opening the door to a million and one more movies, spirituality, ancient wisdom from the pre-modern age, natural law – that’s the thing. Not Tony Stark’s tech and materialism, of the kind Strange enjoys in his ignorant, narrow-focused life as a successful surgeon (until he’s enlightened by circumstance) but the kind of thinking championed by new age quacks, mediums and Scientologists.

One could argue this backward fantasy element is the height of corporate cynicism – selling kids a retardant to keep the brand fresh, but what’s more worrying for Marvel watchers is the realisation that the franchise seems of incapable of maturing at a conceptual level. Doctor Strange, like many of its predecessors, reworks elements from better movies from a generation ago (in this case elements of The Golden Child, Superman) using a rigid template. The films feel more programmed than written, more pre-visualised than directed, while the actors, who remain committed and do their best in underwritten roles, provide light-touch enjoyment. How long can they get away with it, you ask, before audiences start to become weary? When will Marvel follow the Ancient One’s good advice and forget everything they think they know? Thor alone knows.

Certificate: 12A for mumbo jumbo, sanctums built in key movie markets, and reusing the weakest part of Superman (1978).